Global investment in renewable energy has declined in recent years, down 23 percent since 2011 to total $214 billion last year (excluding large hydro-electric projects). Only $5 billion of that investment came from direct government R&D spending, according to Bloomberg New Energy Finance, although subsidies estimated at $88 billion annually continue to suppress energy prices.

Renewable energy’s share of overall power generation, however, has continued to grow (see graph). This is in part due to the decrease in cost of new renewable energy being brought online, particularly solar power generation. Renewables produced more than 40 percent of new power capacity worldwide in 2013, and 8.5 percent of overall electricity generation, found a report by the Frankfurt School-United Nations Environment Programme Collaborating Centre. The two leading sources of renewable energy, solar and wind, have been the top sources of global investment for almost ten years.

Globally, 2013 was a “year of recovery” for solar following two tough years, noted Raymond James energy analyst Pavel Molchanov. Major solar investments by China and Japan drove this growth. China’s government sees it as a way to aid its own solar manufacturers, and also a step in combating its overwhelming pollution problem. Japan’s increase in solar is largely in response to the shutting down of its nuclear program. This new area of investment plans to include large-scale development of utility-scale solar projects.

In the U.S. Arizona-based solar leader First Solar saw its stock increase by nearly a third in March. Approximately two-thirds of First Solar’s revenue derives from utility-scale solar work. According to Forbes, “Utility-scale solar installations in the United States grew by nearly 58% in 2013, and accounted for nearly 60% of solar installations.” However, that growth is expected to slow.

First Solar has plans to broaden its international presence beginning in the Middle East, South America, Africa and India. In a recent company purchase of TetraSun, a developer of polycrystalline solar panels ideal for smaller installations such as homes, First Solar could hope to further develop its rooftop solar market, which would include Japan.

Wind energy, which trails solar in U.S. adoption, has been decreasing in cost over the last four years, down 43 percent over this period. This can be attributed to both declining production costs, but also the Production Tax Credit Congress passed for one year. The wind credit, which expired at the end of 2013, provided 2.3 cents per kilowatt-hour of electricity production in the first decade of a power plant’s operations.

Advocates seeking to restore the credit argue that it won’t be needed forever, just as a stopgap as production costs continue to fall. Some major U.S. wind-energy projects are expected to be completed later this year to drive production totals. 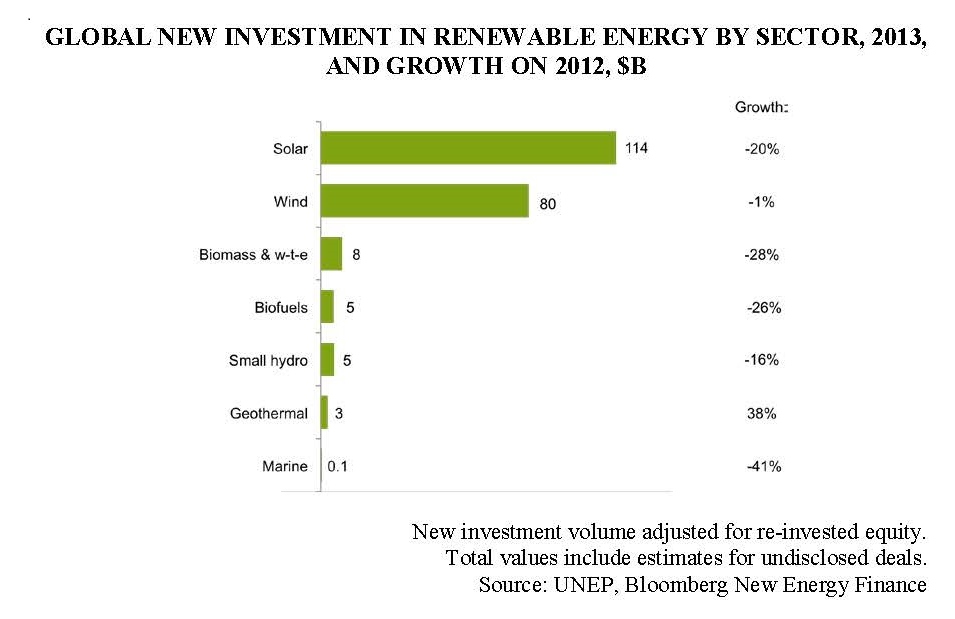