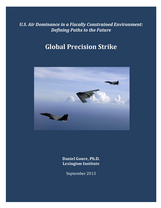 The first conflict dominated by precision strike capabilities, Desert Storm, occurred more than two decades ago. Since then, all conflicts in which the United States has engaged have been marked by the extensive, even overwhelming, application of precision strike capabilities. In fact, the U.S. military worked for decades to achieve its current level of capability which can be described simply as “one aircraft, one weapon, one target”.

A central strategic issue for the future is whether the United States military can maintain its dominant position in the face of three challenges to the current U.S. dominance in global precision strike. The first challenge is the proliferation of so-called anti-access/area denial (A2/AD) capabilities designed specifically to counter the U.S. dominance of the air. The second is the shift in the focus of political-military interests to the Asia-Pacific. The third challenge is the ability of precision strike forces to address an evolving target set.

There are five critical steps to preserving U.S. dominant precision strike in the first half of the 21st century. They are: