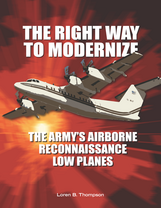 The U.S. Army maintains a small fleet of fixed-wing aircraft for providing timely reconnaissance to its commanders during combat operations. The most capable such planes are EO-5C Airborne Reconnaissance Low (ARL) planes, which detect, identify and track hostile ground targets using a variety of different sensors. This report describes Army plans for modernizing ARL planes, recommending an approach that will assure their tactical relevance through mid-century.

The Airborne Reconnaissance Low component of the tactical-reconnaissance fleet originated in the early 1990s, when the Army modified a handful of propeller-driven regional airliners for use in supporting counter-narcotics and stability operations in Latin America. The planes were subsequently upgraded with additional sensors and communications links to generate specialized reconnaissance along the Korean demilitarized zone, in the Middle East, and in other areas where deployed forces needed prompt, precise information about potential adversaries.

ARL sensing capabilities include high-resolution imaging of remote targets in both the infrared and visible-light segments of the spectrum; interception and localization of radio-frequency communications; and use of synthetic-aperture radar to track both moving and stationary targets. Because it carries a diverse array of sensors, ARL can monitor the movement of elusive enemies day or night, in good weather or bad. By piercing the “fog of war” in a way enemy systems cannot, ARL assures that U.S. soldiers have the situational awareness essential to battlefield survival and success.

ARL bulks large in Army plans for future operations from Africa to the Pacific. However, in order to meet emerging military requirements the fleet will need to be modernized because the current airframe cannot deliver sufficient time-on-station with all the equipment it is expected to carry. A more capable aircraft will be needed, along with a new electronics architecture that can be readily adapted to changing threats. The Army is conducting tradeoffs to determine what design concepts will provide a flexible, affordable solution.

In terms of the airframe, the service will likely stick with a high-wing aircraft that provides maximum visibility for on-board sensors, but it is important to select a plane that will remain in production for some time to come so that the skills and spare parts needed for maintenance can be easily obtained. The plane must also have sufficient payload and range so its capabilities can grow in response to future challenges. The most suitable airframe for meeting future needs is probably the Q400 variant of the Dash-8 manufactured by Bombardier.

In terms of the electronics architecture, the Army needs to transition to an open-architecture, modular design approach so that ARL planes no longer need to carry every sensor that will ever be needed on each mission. A design featuring “plug-and-play” sensor packages that can be readily installed and removed would make it much easier for enhanced ARL planes to achieve the Army’s range, endurance and safety goals. By stressing realism in its design assumptions and funding stability in its acquisition strategy, the Army can avoid the kind of mis-steps made in the past that delayed upgrades to its reconnaissance fleet.

This study was prepared by Dr. Loren Thompson of the Lexington Institute staff as part of the institute’s continuing inquiry into the technological requirements for future military success.