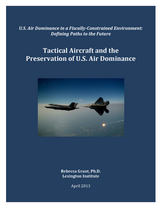 The case for focusing on air dominance has its roots in the most successful of U.S. military operations. One built around it was the invasion of Normandy. Air dominance was the basis of the whole plan as briefed to General George Marshall in early 1942. “The basis was the conviction that through an overpowering air force, numbering its combat strength in thousands rather than in hundreds, the German’s defenses could be beaten down or neutralized, his communications so badly impaired as to make counter-concentration difficult, his air force swept from the skies, and that our ground armies would have an ever-present asset of incalculable power,” wrote one of the planners.

The plan at the time had to be taken “almost on faith,” he noted. Marshall won approval for the plan from the Allies in April 1942 and from that moment the U.S. war effort focused on the “interim step” of achieving air dominance over Europe. It was carried out with bombers and fighters gnawing at the Luftwaffe. When the time came, in June 1944, the air dominance pictured two and a half years earlier was secure and the officer who had helped put together the briefing was in command: General Dwight D. Eisenhower. The victory was essential but the cost was high. In operations against Germany, the U.S. Army Air Forces lost 11,687 aircraft, with 4,274 falling to enemy aircraft.

Air dominance was recognized as an essential condition for land and sea maneuver and proved so again in Korea. But in the 1950s, the growing atomic stand-off overshadowed war plans. The role of air dominance appeared to decline – and as a result, the U.S. struggled again with air dominance in Vietnam from 1965 to 1972. Aircraft of the United States Air Force, Navy and Marine Corps flew 1,875,644 attack sorties in South Vietnam, North Vietnam, Cambodia and Laos.

The cost of air dominance was high mainly because the fighters of the day had been built for nuclear weapons delivery or short-range intercept. The North Vietnamese soon found tactics – with substantial help from Russia and China – that led to mounting losses for U.S. airmen. During the middle years of the war, attack aircraft losses were a near-daily event.

“Operating under ground control, and making maximum use of both cloud cover and the almost benevolent American rules of engagement, the enemy aircraft were adroitly employed. The MiGs, especially the later model MiG-21s armed with heat-seeking missiles, sought to attack the strike flights and make them jettison their bomb loads prior to reaching the target areas.”

The North Vietnamese ground controllers considered the fighter missions to be fulfilled if the bomb-carrying F-105s jettisoned bombs before the target but “they tried to score kills wherever possible,” noted Boyne.

These enemy air combat tactics forced an ongoing battle to retain air superiority. As Boyne put it, “the mission of U.S. forces was to obtain air superiority, destroy the enemy air forces, and conduct long-range bombing operations. The mission of the enemy forces was to defend their most important targets by choosing to engage the American bombers on a selective basis.” Of course, tactical ingenuity again contributed mightily. Success came from using a wolfpack concept where F-4s with bombs and air-to-air missiles flowed a few minutes apart from the F-105s armed with bombs.

Those who survived vowed never to suffer so many lost squadron-mates again. From the late 1960s to early 1970s, the Air Force and Navy designed new fighters with the best of air superiority in mind. Those aircraft were procured at high rates through the 1980s. In 1991, the Gulf War started off with a six-week air campaign. F-15s, F-16s, F/A-18s and other types dominated the skies over Iraq. Under this umbrella, General Norman Schwarzkpof planned a campaign tailored to win back Kuwait quickly with minimal loss of life. As in 1944, the victory of 1991 was built on air dominance. Winning a war takes more than air dominance, of course. But without it the chances are nil – as Eisenhower and Schwarzkopf knew.