The U.S. Postal Service (USPS) lost $754 million in Q1 FY 2015 despite an increase in revenue. The loss is more than double the agency’s $354 million deficit in Q1 FY 2014. However, it is significantly better than the $1.3 billion loss posted in the same period two years ago.

Other topics addressed in this analysis:

Priority Mail volume continues to grow, but revenue is growing at a much slower rate. That’s thanks in part to an increase in the volume of heavily subsidized small packages from China.

An analysis published by economist Robert Shapiro shows that the implicit and explicit subsidies the Postal Service receives could be far greater than previously reported.

The Postal Regulatory Commission (PRC) for the first time rejected a Negotiated Service Agreement, proposed by the Postal Service with Discover Financial Services, finding that it “would not improve the net finances of the Postal Service.”

First-Class Mail provides the highest contribution toward institutional costs, of all the classes of mail. The cost coverage gap between single-piece first class mail and priority mail, the agency’s flagship competitive product,  increased again in 2014. 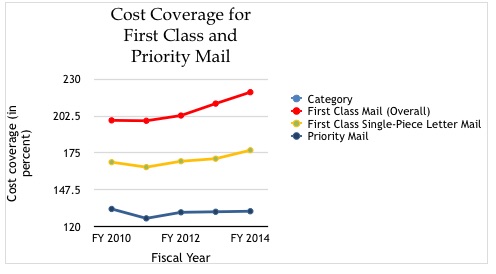 The Postal Service’s present costing system maintains that 46.5 percent of operating costs are considered to be institutional overhead, not attributed to any specific products and services, according to the Postal Regulatory Commission’s FY 2014 financial analysis.  This share has risen steadily for the past 15 years.This continued trend suggests that First-Class Mail effectively subsidizes the delivery of other classes of mail, particularly competitive products, which are charged for decidedly smaller contributions toward this institutional overhead. A product with cost coverage of 200 percent has revenue that is double the attributed costs it poses to USPS.

In 2014, First-Class Mail cost coverage exceeded 220 percent. Presort letters and cards had the highest cost coverage of all classes of mail, at 320.6 percent.

USPS has responded to declining First-Class Mail volumes by degrading service standards for delivery, which in turn has allowed managers to rationalize the agency’s delivery network.

In January 2015, USPS ratcheted First-Class Mail delivery standards down. Since the change, First-Class Mail has been delivered in 2.1 days, on average, a 17 percent increase from the previous average of 1.8 days.

This shift in standards primarily affects single-piece First-Class Mail — the class most often used by ordinary consumers. The majority of affected mail will be delivered in two days instead of one. However, according to a June 2014 poll by HSR Associates, more than 80 percent of consumers responded that this one-day delay would have “no effect,” or that they could easily adapt to it.

Volume for Priority Mail, the Postal Service’s flagship competitive product, is increasing faster than the revenue it brings in.  In Q1 FY 2015, Priority Mail volume reached 295 million pieces, an 8.5 percent increase from the same period of FY 2014. Revenues grew 5.7 percent over that time, to $2.29 billion.

Are Subsidies to Postal Service Growing?

A recent study by economist Robert Shapiro concluded that federal subsidies enjoyed by the Postal Service are worth significantly more than had been previously acknowledged.

As a government agency that is funded entirely by revenue from the products and services it sells, the Postal Service also receives a range of benefits, including immunity from state and local taxes, the ability to borrow from the U.S. Treasury at favorable rates, and exclusive rights of access to residential and commercial mailboxes.

However, the Commission claims that they are largely offset by the requirements imposed on the agency by Congress, such as six-day delivery and discounted mail rates. Shapiro observed that the PRC estimates these costs at $4.5 billion a year.

These numbers are vastly different from those calculated by Shapiro. His March 2015 study found that the Postal Service’s mailbox monopoly was worth roughly $14.9 billion in 2013. The PRC put the monopoly’s value at $810 million in 2008.

The agency’s direct line of credit with the U.S. Treasury saves the agency between $415 and $490 million per year, notes Shapiro. Because it does not have to pay federal taxes, the Postal Service received a direct subsidy of almost $850 million in FY 2014.

Shapiro found that indirect subsidies, including exemption from state and local taxes, property taxes, sales taxes, parking tickets and tolls, were worth $2.18 billion per year.

All told, Shapiro values the Postal Service’s subsidies at approximately $18 billion per year, an estimated 267 percent greater than that issued by the agency’s regulator.

USPS maintains a bilateral agreement with China Post — the nation’s state-owned carrier — that sets rates for certain packages up to 4.4 pounds traveling between the countries. The agreement covering these “ePackets” took effect in 2010.

The agreement was meant to supersede the Universal Postal Union’s (UPU) system of terminal dues, which governs how postal operators reimburse one another for delivering mail that originates in a foreign country. Mailers and recipients can track and confirm delivery of ePackets.  By taking advantage of the lower shipping rates, Chinese retailers are able to offer better prices to online consumers than many U.S. merchants.

Between 2011 and 2012, the number of inbound ePacket packages from China virtually tripled, from 9.5 million to 26.8 million. Corresponding revenue increased as well — but not enough to cover the costs of delivery.

The Postal Service posted average revenue of 94 cents per ePacket. But a report from the Postal Service’s Inspector General showed that USPS lost approximately one dollar for each ePacket it delivered. In FY 2011, net losses for the Postal Service added up to $9.6 million. In 2012, losses ballooned to $29.4 million.

The Postal Service would have lost $1.4 million more if the ePackets were delivered according to the UPU schedule rather than the bilateral agreement with China.

The United States is not the only country on the receiving end of such an aggressive shipping strategy from China.  Earlier this year, a Norwegian postal official noted that his country had received a million packages shipped from China, an increase of more than 30 percent over the previous year.

On March 24, 2015, the Postal Regulatory Commission denied a request from the Postal Service to enter into a negotiated service agreement with Discover Financial Services. This marked the first time that the commission had ever rejected such an agreement.

A Negotiated Service Agreement (NSA) is an agreement between the Postal Service and a company that “provides customized pricing incentives or other arrangements justified by a shift in the company’s mail operations.”  The PRC has approved NSAs with Discover in the past. This time, though, the Commission concluded that the proposed agreement “would not improve the net finances of the Postal Service.”

The 2006 Postal Accountability and Enhancement Act requires that any Negotiated Service Agreement improve the net financial position of the Postal Service. In this case, the PRC found that the NSA would likely cost the Postal Service $18 million over three years. The only way that USPS could turn a profit from the agreement was if Discover were required to pay a penalty for some noncompliance issues.

The Postal Service and Discover criticized the PRC’s analysis of the deal. According to USPS’s calculations, the agency would net $91 million in profit over the three years covered by the agreement. The regulator dismissed these claims after numerous unsuccessful requests for information on how USPS arrived at its conclusion.