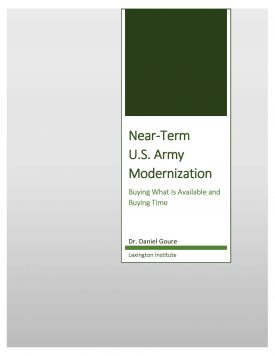 The U.S. Army is rapidly losing its competitive advantages in high-end combat. The ability to achieve tactical overmatch, that combination of superior systems, intelligence, combined arms tactics and command and control is under assault from adversaries who have spent decades developing capabilities and techniques specifically designed to counter areas of Army advantage. Recent conflicts have shown how far Russian conventional forces now exceed the capabilities of the U.S. Army in electronic warfare, long-range fires, tactical air defense and anti-tank systems. Of the 10 major capabilities that define warfighting superiority, by 2030 Russia will have exceeded the Army’s abilities in six, will have parity in three, and the United States will dominate in just one. In the near-future, the Army may not only have to fight outnumbered but without its historic advantages in air and naval power for support and bereft of its communications, navigation and intelligence.

In addition, Russia and China are providing advanced conventional military hardware to a growing number of states which means that if the Army has to fight in the Middle East, Africa or Asia, it will face advanced Russian and Chinese equipment. The terrorist group ISIS has successfully employed Russian advanced anti-tank guided missiles against U.S.-made Abrams tanks operated by the Iraqi Army.

Today, the U.S. Army faces the proverbial “perfect storm” consisting of ever-increasing demands, ever-more capable threats, a shrinking force structure and continuing budget strictures. In this new world, the U.S. Army is at a high risk of being outnumbered, outgunned and outmaneuvered by prospective adversaries. A recent Heritage Foundation report downgraded the Army’s military power from “marginal” to “weak.”

On its present course, the U.S. Army will lack the modern equipment and organization necessary to deter or, if necessary, defeat a high-end adversary. The U.S. Army needs to rebuild its capabilities to engage in high-end combat that made it the most feared competitor in the world. This involves restoring the technological, tactical and operational superiority developed over decades. What the Army must do is maximize the potential of existing platforms and systems. There are programs in place to enhance the capabilities of virtually all the Army’s armored fighting vehicles, long-range fire systems and aircraft. Near-term modernization also is being pursued in unmanned aerial vehicles, soldier capabilities and on-the-move communications. What is problematic is the scale and pace of these programs.

Investment in the near-term modernization of the U.S. Army is one of the few areas where the incoming administration can have an almost immediate impact on the state of the U.S. military. Increasing the number of ships deployed by the U.S. Navy will take years. Modernizing the U.S. nuclear triad is a project of decades. But the U.S. Army can achieve a substantial increase in combat power within the next five years.

An infusion of an additional $15 billion a year for each of the next five years (FY2018-22) would allow the Army to expand investments in critically needed and time sensitive capabilities in lethality, force protection, fires, air and missile defense, aviation, communications/networks and electronic warfare. Almost all of these investments are based on accelerating current procurement plans. These proposed investments do not constitute an end-state for Army modernization. However, an accelerated upgrade program will significantly improve the combat capability of early arriving forces and buy time for the longer-term development of a new generation of platforms and systems.