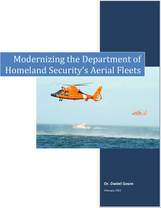 When Congress created the Department of Homeland Security (DHS) in 2002, it brought together 22 separate government organizations ranging from the U.S. Coast Guard to the Border Patrol. A number of these had been operating fleets of maritime and aerial patrol platforms. The leadership of the new department recognized the importance of concentrating and integrating its assets, most particularly aircraft and marine vessels. To this end, DHS assigned Customs and Border Protection overall responsibility for management of air and maritime systems other than those belonging to the Coast Guard and within Customs and Border Patrol stood up the Office of Air and Marine (OAM) in 2005. OAM thus became the world’s largest law enforcement air and marine service with around 280 aircraft and 100 marine vessels. Due to the manner in which it was created, OAM inherited a collection of some 20 different aerial systems, many even then quite old and most not equipped with the kinds of modern surveillance and communications capabilities commonly available on military aircraft. Together with the Coast Guard’s air arm, DHS now operates an air fleet of nearly 500 fixed wing aircraft, helicopters and unmanned aerial systems.

The Coast Guard and OAM faced twin challenges: first, operating and maintaining a diverse and aging aerial fleet; and second, implementing a program to modernize that fleet. With respect to the first, both organizations have demonstrated remarkable success. However, they also face the enormous challenge of maintaining the utility of their aging fleets while also implementing major modernization programs. Both face difficulties due to the age of many of their systems. Nearly half of OAM’s aircraft are more than 33 years old. While some aircraft such as the P-3 Orion are undergoing service life extension programs, most of the older systems are at the end of their expected service lives and must soon be replaced.

The Coast Guard air arm is stressed by heavy demands on the fleet. Like OAM, the Coast Guard has been struggling to modernize its air arm as part of the Deepwater program. Some older systems, such as the 95 HH-65B Dolphin helicopters, are being upgraded and others such as the HU-25 Falcon aircraft are being replaced.

Over the past several decades, there has been a revolution in military airborne intelligence, surveillance and reconnaissance. Integrated airborne reconnaissance has been one of the most decisive factors in U.S. military operations in Iraq and Afghanistan as well as in NATO’s air campaign in Libya. DHS is just beginning to exploit this revolution for the purposes of securing the nation’s airspace, borders and territorial waters. The Multi-role Enforcement Aircraft program will provide OAM with up to 50 advanced surveillance aircraft.

DHS’s current aerial fleets are undersized, heavily engaged and aging. Both OAM and the Coast Guard would benefit from the recapitalization of their aging assets. However, even before the current budget crisis, funding cuts have set back modernization efforts. As a result, the security of the homeland is at increased risk. The Obama Administration and Congress must provide the necessary resources to insure the full and timely modernization of DHS’s air systems, including the acquisition of modern aircraft and helicopters.