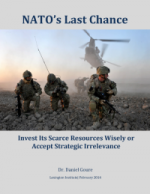 The Lexington Institute today is posting a study entitled “NATO’s Last Chance: Invest Its Scarce Resources Wisely or Accept Strategic Irrelevance.” If you would like to read the study, click here to download it in PDF format.

For more than two decades, NATO spending on defense has declined to levels today that are perilously close to disarmament.  Senior U.S. officials have repeatedly warned NATO that its failure to invest adequately and appropriately in defense places the future of the Alliance at risk.  In 2011, Secretary of Defense Robert Gates called on NATO to invest its defense resources both more wisely and strategically. Yet, nearly three years later, NATO spending continues to decline, forces are being cut and military modernization programs are being deferred or cancelled.

NATO not only does not spend enough on defense, but what it does have it spends poorly.  NATO consistently overspends on people; half of NATO’s total defense spending goes to personnel.  Procurement and, in particular, R&D are shortchanged.

NATO has sought to compensate for reduced resources and fewer forces by encouraging its members to pool available assets and enter into multinational programs. Unfortunately, political differences, concerns over the loss of sovereignty, the desire to protect domestic jobs and industries and even hostility between member countries are all making it extremely difficult to take the obvious and necessary steps to coordinate defense decisions, pool resources, share assets and seek out opportunities for role specialization.

A wise investment strategy for the Atlantic Alliance would include the following elements: