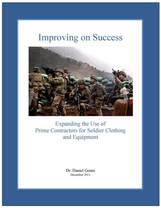 The individual soldier is the U.S. Army’s most important and frequently deployed asset. As such it is imperative that the soldier be provided the best clothing and individual equipment. The right clothing is a combat multiplier because it allows U.S. soldiers to operate under conditions that the enemy cannot. When U.S. soldiers deployed to Afghanistan after September 11, 2001 they were confronted by extremes of terrain, altitude, temperature and weather. The lack of infrastructure required extensive dismounted operations, often at high altitudes and in poor weather. U.S. soldiers lacked the appropriate clothing to operate effectively in extremely cold weather and harsh terrain.

The Pentagon was faced with the enormous task of providing the entire Active Component and mobilized reservists with the clothing and individual equipment with which to conduct intensive and protracted operations. This challenge was made all the greater because in many cases the desired clothing and equipment was only available from non-defense commercial vendors. Timing was also a factor. When the Army decided to change the uniform camouflage pattern for forces going to Afghanistan it wanted the first uniforms available in just a few months.

PEO Soldier chose an innovative and, in the view of some, risky, approach. It selected a private sector prime contractor to provide the entire military with the third generation or GEN III Extended Cold Weather Clothing System (ECWCS). This company procured the GEN III ECWCS components, managed the supply chain and ensured that the required number of complete kits were shipped in time to deploying units. The GEN III ECWCS prime contractor successfully managed more than a dozen subcontractors while overseeing the delivery of some 1.8 million sets of clothing.

The prime contractor model was so successful that PEO Soldier used this approach for acquisition of another clothing system, the Fire Resistant Environmental Ensemble (FREE) and for the Modular Sleep System (MSS). By adopting this innovative contracting approach PEO Soldier was able, radically and rapidly, to improve the capabilities available to soldiers in Iraq and Afghanistan. Equally important, the prime contractor model saved money.

The Department of Defense needs to capitalize on the private sector’s record of success in procurement and supply chain management. Even as the conflicts in Iraq and Afghanistan wind down, the department should expand the use of this approach as far as is practical. This would ensure a basic supply chain for advanced textiles and clothing items. Also, it would allow for continuation of direct vendor deliveries, save money on warehousing and third-party logistics and enable ongoing improvement/ innovation of parts.

The same contracting model developed for the GEN III and FREE clothing systems could be applied to other soldier subsystems, such as body armor, load carrying systems, helmets, boots and individual communications equipment. In addition, the Defense Logistics Agency Troop Support should leverage industry strengths in supply chain and inventory management when determining which items they will procure/receive/stock/issue and which are better managed by a prime contractor.