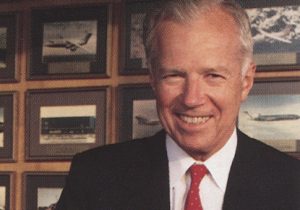 Long time Lexington friend and supporter Grover Connell passed away in May at age 100. Here is the second blog we are publishing in his memory, by our Chairman Jim Courter:

The first time I had dinner with Grover Connell, his wife Pat, daughter Terry and other family members, I was told by one of his children, “Jim, you will find out this is a one drink, two dessert family”, referring of course to Grover but everyone else followed his lead. Over time, I found out that that was absolutely and always the case. One drink, two desserts. When I saw him after dinner on his trips to Washington, DC, he would often end the day with a milk shake or scoop of ice cream.

Each and every time I had dinner with Grover in New Jersey, his wife Pat was there. He included her in everything after 6 pm.

Despite his enormous success, Grover was always low profile. He never bragged. He was impeccably polite, almost courtly in manner.

He was never garish in any respect. He traveled and lived modestly. He lived in the same house in the same nice but modest neighborhood for most of his adult life.

Grover believed in open communication with employees. His office had glass on all sides and was visible by everyone on his floor and was shared with half a dozen others.

He remembered the names of hundreds of employees. Each time I visited him at his Westfield office he would walk me around and introduce me to what seemed like every employee on every floor.

I met Grover early in my Congressional career so I knew and visited with him for almost 40 years, invariably having lunch with him, some key employees and always, a member or two or more of his family. First his children and then his grandchildren. He was mentoring them from the beginning to work hard, be honorable, and act humbly. Unless it was late in his 90s I don’t ever remember him at work wearing a long-sleeved shirt. Tie and jacket of course, but always a short-sleeved shirt. During lunch, the tie would stay on but the jacket would always come off.

Grover was, in the finest sense of the term, an American original.