Tennessee’s white, black, and Hispanic students all increased their performance as measured in proficiency scores by around eight percentage points since 2007.  Overall, scores remained below national averages, as the state ranked 36th in 2015, up three slots since 2007.

This represents an overall shift upward in reading proficiency in the state. In fact, the number of black fourth graders scoring proficient or above on NAEP doubled, to 18 percent, from 2007 to 2015. However, this still means four out of every five black students in Tennessee remain only at basic level or below.

Around the state, different schools and school districts have embraced different strategies for improving reading over this time.  Shelby County created a new consortium of turnaround schools in 2012 under iZone, a program that is improving those schools in the bottom 5 percentile. The 21 schools in iZone so far have adopted strategies like extended school hours, parent counseling, and successful feeder patterns.  No official data exists for the program’s testing scores, but iZone affects around 10,000 students in the Memphis area.

For example, The Tennessean reported that Wilson County schools were on their way to improved reading skills. A $30 million investment over three years from the Department of Health and Human Services helped teachers and administrators tackle the fact that students are not reading on grade level.

It’s worth noting that Tennessee’s Hispanic students made their increase in proficiency rates almost entirely in the four years prior to 2015.  Both Hispanic students and white students saw a decline in their scores from 2007-2011, but black students did not.

Hispanic students improved from 18 percent proficient and above to 32 percent in just the four years prior to 2015. But the gains were not limited to the top achievement levels for Hispanic students: the percentage scoring at woeful “below basic” levels in fourth grade reading fell to 41 percent in 2015, from 49 percent just two years before. From 2013 to 2015, no other group of students in Tennessee saw this type of improvement, eight percentage points in proficiency,  on their NAEP test.

There has been little shift in economic or educational background for Hispanic adults in Tennessee over this period that would explain such gains.

Generally speaking, it is no secret that students with a higher socioeconomic background perform statistically better on assessments. Between 2009 and 2015, Hispanic adults saw a mere .4 percent increase of high school degrees or equivalency, while the median income for Hispanics in the state rose from $18,411 to $20,204 (adjusted for inflation). However, this Census data only reports income for those twenty-five and older, while the median age for Hispanics in Tennessee is twenty-four.

A significant portion of Tennessee’s growing Hispanic population are English Language Learners. A significant policy change in 2014 abandoned its previous program, the English Language Development Assessment (ELDA), and shifted to a new approach, called Assessing Comprehension and Communication in English State-to-State (ACCESS). One advantage of the ACCESS program is it begins identifying and educating ELLs at the kindergarten level, as opposed to the ELDA which only began in 3rd grade. The state’s Every Student Succeeds Act plan, a policy handbook that every state must publish by the end of this year, mentions the state’s work with the World-Class Instructional Design and Assessment (WIDA) consortium. The WIDA consortium is a collaboration of many states that helps set guidelines for ELLs.

Exclusion rates for ELL students on the NAEP test have also declined over this period – from 16 percent to 12 percent.

When 2017 NAEP scores are released this fall, Tennessee’s fourth grade students have a strong chance of reaching or surpassing national averages if the state can maintain this growth trajectory. 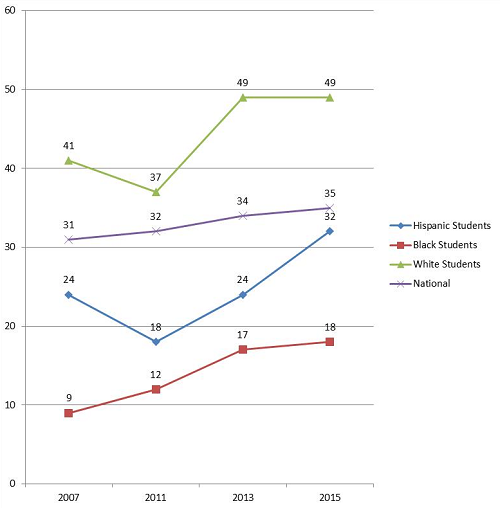