Ambassador Robert D. Stuart Jr., who passed away on May 8 at the age of 98, was an American patriot and gentleman.

Ambassador Stuart believed that the true roots of America’s greatness reside in the values that have not changed since our founding – honesty, decency, compassion, self-reliance, industry and thrift. He embraced these values throughout his lifetime.

Stuart’s lifelong commitment to serving his country began as a student at Yale University’s Law School, where he became the founding National Director of the America First Committee in 1940. When Pearl Harbor was attacked, the committee immediately disbanded and Stuart applied for military service. He then served in the U.S. Army, reaching the rank of Major before his discharge in 1946. 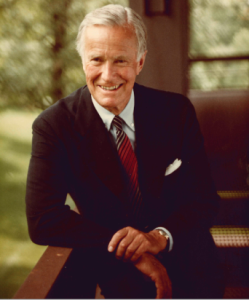 His work and his family were of great importance to Ambassador Stuart throughout his life, and in both he enjoyed remarkable success. Stuart led one of America’s iconic companies, Quaker Oats, as its CEO for 15 years. The company under his helm achieved tremendous growth and diversification, while its brands remained essential staples of American life.

Ambassador Stuart was appointed U.S. Ambassador to Norway by President Ronald Reagan, and held that post from 1984 to 1989. He continued to serve his nation as a Commissioner on the Base Closure and Realignment Commission’s second and third terms, in 1991 and 1993. It was there that he met and became close friends with Lexington’s Chairman, Jim Courter.

He dedicated much of his private life, and his work through the Stuart Family Foundation, to advancing a core of critical policy issues. Improving the quality of our entertainment industry by reducing the gratuitous violence, explicit sex, foul language and degrading behavior seen on popular media outlets was one of his top priorities. He saw confronting the rise of divisive multiculturalism and ethnic separatism as threats to our democracy and fiber as a nation. And he worked tirelessly to promote ballistic missile defense, which was finally deployed by the United States in the last decade of his life.

Ambassador Stuart was an optimist by nature, and generous in character. His large and loving family carries with them his lessons of a life well-lived.  The Lexington Institute will miss his ideas, friendship, and leadership.