USPS projects a net loss of more than $6.4 billion for FY 2011 and a cash shortfall of $2.7 billion at the end of the fiscal year. The Service is also on track to reach its statutory debt limit of $15 billion, which would prevent it from borrowing more money from the federal Treasury. Despite substantial decreases in mail volume, the Postal Service has posted impressive productivity gains. Service performance has also improved even as the agency has pared its workforce and cut millions of workhours.

The Postal Service is gambling on business mailers for future revenue growth. Many existing business-focused products contribute less to overhead than does First Class Mail, and it’s not yet clear whether the Postal Service’s commercial outreach will generate revenue sufficient to put the organization back in the black.

A February 2011 report from the Postal Service’s Office of Inspector General observed that a reduced labor force at postal processing and distribution centers posted impressive gains in productivity. The analysis noted that the Service logged 26.1 million fewer mail processing workhours in 2010 than it had in 2009. The Service handled 60 more pieces per hour in 2010 than it did in 2009, which represented a 7.6-percent increase in productivity.

The OIG’s report also noted that the Postal Service improved its First Class service performance scores for overnight, two-day, and three-day mail in 2010 — despite the workforce reduction.

The Postal Service’s ability to trim workhours without sacrificing delivery performance raises questions about the need for “relax[ing] current delivery standards to enable additional facility closures and associated savings,” as articulated in a December 2010 report from the Government Accountability Office. Put another way, USPS has demonstrated that it can generate labor savings without cutting service for monopoly consumers.

Overall, Total Factor Productivity rose 2.2 percent in 2010. The TFP increase is even more impressive in light of a 3.5-percent reduction in mail volume and a 6.9-percent decrease in First Class Mail volume. The rebound in TFP more than made up for declines in 2008 and 2009 (see graph).

Few observers believed the Service could return to this level of productivity growth so quickly. In an online poll conducted by the Inspector General’s Office early last year, 60 percent of respondents predicted that TFP would continue its decline in 2010.

So while the decline in mail volume in 2010 certainly impacted productivity negatively, reductions in workhours and an increase in the number of delivery points, a signal of an increased postal workload, were enough to nudge productivity into positive territory again.

In the first quarter, the Postal Service continued to reduce workhours, by 2.1 percent compared to the same period last year. That’s equivalent to a reduction of about 3,600 full-time employees. At the same time, overtime increased by 14.9 percent relative to the first quarter of 2010. Rural delivery hours also increased by one million. Rural areas accounted for more than half of the growth in delivery points.

Since 2000, TFP has doubled, according to Postmaster General Donahoe. In the same time period, the average number of pieces of mail per delivery has declined from five to four. By 2020,

For each of the past three years, the Postal Service’s workers’ compensation expenses have increased substantially as a result of changes in the discount rate used to calculate future liabilities. In 2010, those expenses increased $2.5 billion, and in 2009, workers’ comp expenses went up $1.3 billion. In 2008, the corresponding increase was $417 million.

In its 2010 10-K report, USPS downplayed workers’ compensation expenses by stating that these costs are dependent on discount, inflation, and interest rates, which are outside management’s control.

Donahoe expects to see an average of three pieces per delivery. 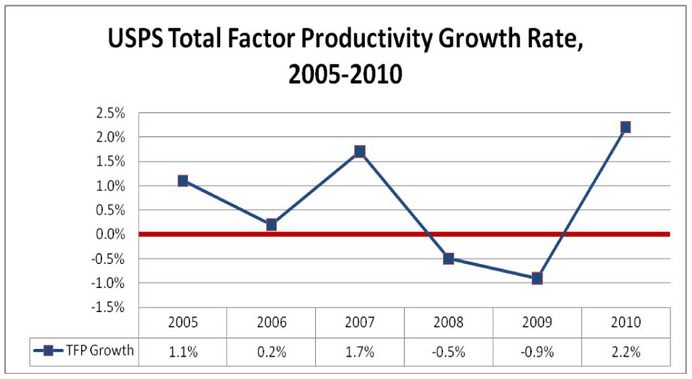 For each of the past three years, the Postal Service’s workers’ compensation expenses have increased substantially as a result of changes in the discount rate used to calculate future liabilities. In 2010, those expenses increased $2.5 billion, and in 2009, workers’ comp expenses went up $1.3 billion. In 2008, the corresponding increase was $417 million.

In its 2010 10-K report, USPS downplayed workers’ compensation expenses by stating that these costs are dependent on discount, inflation, and interest rates, which are outside management’s control.

With First Class Mail volume declining, the Postal Service has redoubled its efforts to attract more business and advertising mail. In January 2011, the Service reached an agreement with Discover Financial Services that some postal observers believe could serve as a model for negotiated services agreements (NSAs) with other big mailers.

The proposed deal, which must be reviewed by the Postal Regulatory Commission, would encourage Discover to send more Standard Mail to offset its diminishing usage of First Class Mail, as more of its customers receive their statements online.

Standard Mail is much less profitable than First Class Mail and contributes a smaller portion of its revenue toward institutional overhead. So the Postal Service is requiring Discover “to send an extra $1.65 worth of Standard Mail to offset each dollar decline in postage from First Class Mail,” according to the NSA filing.

The filing continues: “In order to qualify for a rebate (and avoid paying a penalty), [Discover] will have to increase the Standard Mail postage it pays another five to 15 percent.” USPS projects that the NSA will generate between $2 million and $15 million in additional revenue.

The PRC has not yet signaled whether it will approve the proposed NSA with Discover. In the past, the commissioners have expressed skepticism with the Postal Service’s estimates of revenue growth from worksharing.

If approved, this could present an important precedent for other corporate mailers.

Indeed, the PRC did so in a recent decision approving a 1.7-percent rate hike for most monopoly products — but not stamps. Chairman Ruth Goldway wrote in a concurring opinion, “I believe the workshare discounts that the Postal Service has proposed continue to allow for inefficiencies in mail processing.”

According to the Postal Service’s 2009 Annual Compliance Report, Standard Mail and First Class Mail both contributed a greater percentage of the revenue they took in toward institutional overhead than did any competitive products, including Express Mail, Priority Mail, and Parcel Select (USPS’s most economical shipping option, which is only available to businesses).

The cost coverage figures for First Class Mail could go even higher. On February 28, the Postal Service petitioned the Postal Regulatory Commission to allow it to move First Class Mail Parcels from the market-dominant category to the competitive products category.