Former Congressman and Base Closing Chairman Jim Courter turns 70 today. Courter is also Chairman of the Lexington Institute, where he has been a key organizer, policy advisor and fundraiser since we opened our doors in 1998.

I met Jim Courter in 1984 when he was a member of the House of Representatives, and he hired me as his Chief of Staff. As a highly successful lawyer, businessman, and politician, the lessons learned from Jim’s life are worth a look. Here are what I call my three Courter axioms:

1. Be nice to everyone, even your opponents and competitors.

2. Do favors for people up front; all favors will roll around the world and eventually come back to you, your friends and your family.

3. If a good friend is in trouble, shove your whole stack in.

And here are a few real world examples of those maxims from Jim Courter’s life:

In 1986 Congressman Courter was leading the effort to pass a $100 million aid package for the Nicaraguan freedom fighters, known as the Contras. The bill passed on June 25th. Late that afternoon I got a call from Laura Slomka, who ran Courter’s office in Somerville, New Jersey. The office had just been occupied by a dozen protesters, and they refused to leave until they got a meeting with the Congressman. I asked Jim what in the world we should do. He asked if Laura was safe, and if she was he suggested we buy all the protesters pizza. I said what? He said “yes, it is late afternoon, they are probably hungry, and eventually they will want to go home.” So we bought them pizza, and in a few hours they all went home. That same day a band of protesters also occupied a U.S. Senator’s office in New Jersey, and he had them all arrested.

Eight years later Courter was back practicing law in New Jersey, and met a prospective client who barely spoke English and had a sticky problem with the state government. Jim listened, and after noodling on it for a day or so realized the issue was both meritorious, and easy for him to fix, which he did. Courter never sent the guy a contract or a bill or anything. Three weeks later Jim looked out of his living room window and saw that same prospective client standing next to a big, beige, brand new Mercedes Benz. He walked up to Jim, handed him the keys and the title, and said “thank you.” Jim was real pleased he finally got that new car that his wife Carmen had been wanting. 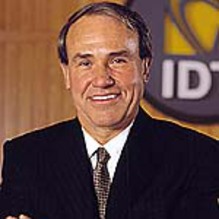 Finally, I have to bring up Iran-Contra. It was a long time ago and we all now have warm and fuzzy memories of the Reagan presidency. But in fact politics was just as ferocious and partisan back then as it is now. The 1987 Congressional Iran-Contra Committee was set up in the spirit of the Watergate Committee, in the hope and expectation that Ronald Reagan would be censured, or impeached. And Bob Michel and Dick Cheney were smart enough to make Jim Courter a minority member of that committee. You know that old rule about always having a good lawyer.

A White House aide, Oliver North, was the center of the investigation, with the focus on his fundraising activities on behalf of the anti-communists in Nicaragua. The key was to find a link between that fundraising, which may have violated a recently passed Congressional restriction, and the President of the United States.

The hearings were coming to a crescendo, and Oliver North was on the stand. The majority Democrats were relentlessly focused on the microscopic details of that Oliver North fundraising. But Jim Courter insisted on discussing why those funds were being raised in the first place. Jim insisted on having Colonel North present photographs to the Committee of the Soviet weapons that were piling up in Nicaragua. Why? Because North was raising money to help the people who were being mowed down by those weapons, and photos from the Central American war were the central prop of North’s fundraising campaign. They included crate after crate of AK-47 rifles. And surface to air missiles. And T-55 tanks. And Hind helicopters, which are essentially flying tanks.

Well, the majority Democrats refused to let the photos get presented in the hearing, but that just added fuel to the fire. Those photos became an international TV and political sensation, and people across the country saw just how ruthless the communist regime in Nicaragua was. Phones started ringing off the hooks across the Congress. People were even calling our office to complain about the treatment of Oliver North and the Contras, when Jim Courter was the one who insisted on showing the photos in the first place. The hearings were turned upside down, and then fizzled into a bad historic memory when they were shut down a week later. And that ended the last real effort to string up Ronald Reagan before he rode off into the western sunset.

All of us at the Lexington Institute salute Jim Courter on his birthday, and thank him for everything he has done for his friends, and his country. And since 70 is the new 40, we can assure you neither the good guys nor the bad guys have heard the last of Jim Courter.