In the early 1990s, Virginia parents rose up in protest and ultimately struck down something called the Common Core of Learning that state education officials were proposing to implement in every public school. The Common Core of that day derived from fuzzy Outcome-Based Education theory that placed heavy emphasis on shaping students’ sociopolitical attitudes and far less on the academic basics.

In 1995, Virginians rallied in support of the State Board of Education’s adoption of Standards of Learning to provide a means of objectively measuring students’ grasp of the fundamentals of math, English, science, and history. Virginians generally took pride in independent analyses indicating the Old Dominion’s standards were among the nation’s most rigorous.

Seventeen years later, Virginians may wish to debate whether the SOL still serves the purpose of pushing students and schools to meet lofty learning goals. Has the annual assessment been watered down in an attempt to show progress that exceeds the reality of how much students are actually learning?

Should Virginia make its tests more content-rich? Or should it ditch all multiple-choice items in favor of problem-solving exercises and portfolios, as some education progressives would wish?

The Obama Administration is hoping Virginia will join the 45 states that are jettisoning their standards and tests and preparing to implement the federally backed Common Core national standards. However, such action would come at considerable expense, and require forfeiture of one of Virginia’s most powerful school reform instruments – its control over content and performance standards.

Two sets of eye-opening data provoking such questions are (1) the percentages of Virginia 8th graders achieving a level of proficiency or above (a passing mark) on the SOL reading tests given in 2003, 2007, and 2011, and (2) the equivalent passing marks on the National Assessment of Educational Progress (NAEP), a test given in all states and governed by a nonpartisan board that has earned respect as the Nation’s Report Card since 1969.

There are few more essential yardsticks for evaluating students’, and schools’, academic progress than eighth-grade reading proficiency. It is a strong predictor for who will graduate, and who will be prepared for introductory college courses.

The score breakout by race is even more telling.

SOL scores for Richmond Public Schools’ white students followed these trends closely, although black and Hispanic students fell short of their peers in these populations statewide (see nearby chart).

If those scores were valid, they would be a cause for great celebration, because the majority/minority achievement gap would have dramatically shrunk, thereby furthering a central objective of massive federal and state education spending since 1965.

Unfortunately, the NAEP results broken out by race tell a drastically different story.

Both white and black students’ scores flat-lined, with white eighth graders’ passing rates going from 44% in 2003 to 43% in 2011, and their black classmates’ passing rates barely budging from 15% in 2003 to 16% in 2011. In fact, the 38% of black eighth graders testing at “below basic” levels in reading – lacking even partial mastery of grade-level knowledge and skills – was the same in 2011 as it was in 2003. Statistically, most of these young people will not graduate high school.

The achievement gap persisted and even widened.

What could account for these contrasting results? Of course, NAEP and the SOL are different tests. While NAEP samples general knowledge levels of American kids at grades 4, 8, and 12, the Virginia assessment is geared to determining how well students have mastered the state’s own standards. Even so, it is reasonable to suppose that improved reading in Virginia schools would translate to some gains on NAEP.

Circumstantial evidence indicates that in 2006 Virginia education officials changed their SOL “blueprints” – the guide for test developers in preparing test items – in such a way that appears to have made the questions easier. That would help explain the enormous spike in scores between 2007 and 2011 (with the black passing rate, for instance, going from 58% to 82%).

What to do? Some would scrap standardized testing altogether, contending that you don’t fatten the pig by weighing it frequently. Others would go to a more subjective model consistent with children constructing their own knowledge (constructivism).

Virginia has been a leader in education before, and it could be one again. It could begin by revamping its own standards and tests to make them more rigorous and relevant. It might join with the other states that have resisted the siren call of Common Core – Texas, Alaska, Nebraska, and Minnesota – along with others that are now considering withdrawal, in a coalition to advance competitive, common-sense standards within the framework of federalism.

But, above all, it must ensure that Virginia’s young people, regardless of their zip code, race, or family’s economic status, are all provided meaningful opportunities to gain mastery over the skills they will need to keep the Old Dominion competitive in the decades to come.

(Holland and Soifer are education analysts with the Lexington Institute in Arlington.) 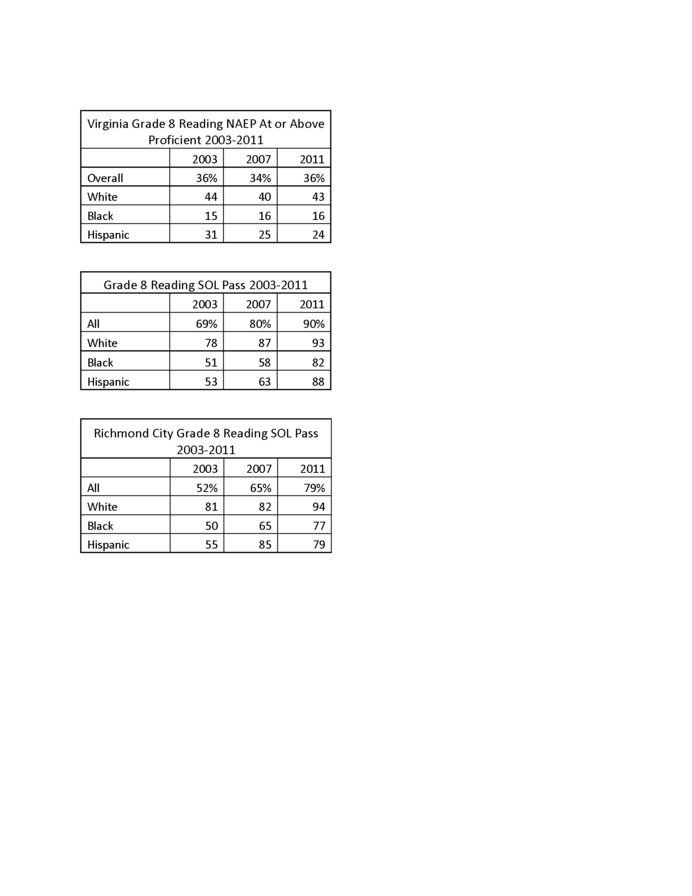