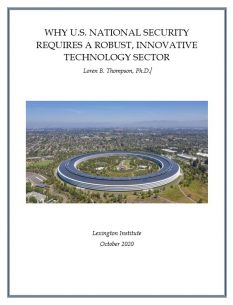 Introduction: America is facing the most serious challenge to its security in a generation.

Every nation strives for security. Although the phrase “national security” in common usage has military overtones, there are other elements as well—economic, demographic, cultural. For instance, energy security was a major concern of U.S. policymakers in recent decades, and environmental security related to climate change now garners similar interest.

What every facet of national security has in common, though, is that it is shaped by technology. The wide oceans separating North America from the Eurasian land mass were once thought to confer military security on the republic, but long-range weapons altered the significance of distance. The rapid rise of formerly poor East Asian nations has been driven in large part by their mastery of technologies that did not exist two generations ago.

Technology is thus a critical driver of national security, because it is the variable that determines the significance of all the other factors. In the past, the United States was able to sustain a culture of innovation that permitted it to lead the world in advanced technologies. Now that may be changing as other nations pursue investment initiatives aimed at dominating the global information revolution. For example, the Chinese economy today generates as much manufactured output as Germany, Japan and America combined, and that output increasingly consists of advanced information technology.

This report is about the role that America’s own technology sector plays in bolstering national security. It is focused mainly on the defense dimensions of America’s strategic competition with China and other nations, illuminating how a robust and innovative domestic technology sector can contribute directly and indirectly to U.S. military dominance.

Unlike those earlier dangers, the technological content of today’s threat from other nations is grounded largely in commercial innovations—innovations readily adapted to new concepts of warfare. If the United States is to emerge from this latest contest with its leadership position intact, as it did in earlier rivalries, it will have to compete successfully in commercial markets through commercial enterprises. This is not an “arms race” in the traditional sense, but its implications for America’s place in the world are every bit as serious as the danger posed by dreadnaughts and bombers in earlier generations.