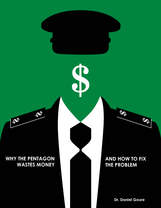 The U.S. defense budget is challenged perhaps as never before in modern times from without and within. The 2010 bipartisan Budget Control Act (BCA) imposed minimum reductions of some $480 billion over the next ten years. There is also the possibility of an additional cut in defense spending of around $500 billion over the same ten-year period if the provision in the BCA for sequestration is triggered in January 2013. Defense officials have characterized this additional decline in spending as nothing short of catastrophic. Within the defense budget there is the imperative to modernize elements of the force that are relying on equipment and systems 30, 40 and even 50 years old. There is also the growing cost of so-called defense entitlements that are must-pay bills but which limit the availability of resources for critical investments.

To meet these internal and external challenges, the Department of Defense has been pursuing a two-pronged strategy of seeking greater efficiency in defense activities and reforming the acquisition process. Efficiency measures have resulted in some $200 billion in savings through personnel reductions, base closures and organizational reforms. Acquisition reform has focused on reining in the requirements process, curbing the use of high risk technologies, improving management techniques and increasing the use of competitive contracting.

The problem is that current reform efforts focus only on part of the problem and the portion that may be least amenable to rapid or radical change. In truth, the development and procurement of advanced weapons systems is inherently a costly and risky business. Current acquisition reform efforts are largely directed at addressing cost growth and technical failures associated with the acquisition of major weapons systems. But even if the acquisition system were functioning perfectly, pressures from within the defense budget would necessitate a serious effort to cut costs.

There are a host of hidden cost drivers that act as a significant tax on the effective utilization of defense resources while not providing clear benefits. These include: excessive regulation and specifications, barriers to full and fair competition, poor cost accounting and inadequate cost analyses, outdated supply chain management techniques and the uneconomical funding for programs. Many of these same factors make it difficult to reduce costs by applying commercial best practices to defense activities. In addition, they act as impediments to efforts by non-traditional defense companies to enter the sector, thereby reducing the potential pool of competitors for defense contracts, as well as reducing opportunities for the transfer of innovative products and processes into defense production.

Numerous studies and many reform efforts have shown that substantial cost savings can be realized by addressing these hidden cost drivers. Reducing the regulatory burden on defense activities alone could save tens of billions of dollars a year. Taken together, the savings could be between $45 and $95 billion a year. Addressing the array of hidden costs in the defense budget could secure sufficient savings to offset the impact of sequestration. Moreover, these savings could be realized without any reduction in the size or capability of the U.S. military.