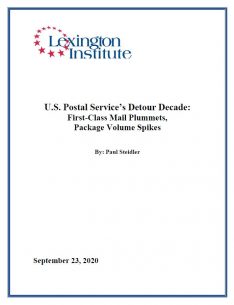 The U.S. Postal Service’s (USPS) mail delivery standards and performance are under intense scrutiny as the election approaches and it recovers from a summer disruption.

First-class mail delivered on time fell to as low as 83 percent in July before starting to recover. It was above 90 percent when Postmaster General Louis DeJoy took office on June 15.

Getting back to the 90 percent rate, however, is nothing to celebrate. At that performance rate, it takes more than half a day longer to deliver first-class mail than in 2012. Americans deserve better.

A review of Postal Service practices and statistics shows that slowing delivery times are part of a decade long pattern that shows no signs of turning around. Lower delivery standards went into effect in 2012 and 2015. Despite the lower standards, USPS service performance continues to decline, meaning it takes the mail longer to be delivered.

While mail volume was destined to decline because of the Internet, the time it takes to deliver mail was not. All indications are it takes longer to deliver mail today than in the 1970s when mail volume was at comparable levels, and mail technology was inferior. The Postal Service’s premeditated strategic decision to increase delivery times and reduce service standards likely accelerated the decline in first-class mail volume.

Perhaps more disturbingly, there is no attempt being made to revitalize first-class mail, which the Postal Service has often referred to as its most profitable business. First-class mail is also not going away. It will be an enormous monopoly business of approximately $15-20 billion annually five years from now.

The decline in first-class mail standards and increased delivery times has directly corresponded with USPS’s aggressive expansion into the packages business, where timely deliveries are essential. USPS, however, is not required to disclose package delivery times and guards this information intently. On the few occasions when this information has leaked out, the statistics show stellar performance. It is counterintuitive to believe, though, that the package business would boom without consistent, timely deliveries.

This past summer is not the first time that significant mail delays have occurred. There were lengthy nationwide delays, especially in rural America, in 2015 when new standards were put into place. This led to Congressional investigations and proposed legislation. The underlying causes of the delay, however, have not been addressed.

Furthermore, USPS’s self-reporting of how it has met delivery standards is often confusing. The core figure is the percent of time that a product category has been delivered on time. As such, it is difficult to extract how much longer or shorter it is taking a piece of mail to reach its destination. Based on USPS’s own information, however, first-class mail takes more than half a day longer on average to be delivered today than it did in 2012.

These issues and related policy recommendations are reviewed in the following issue brief. To improve mail service and transform USPS into an organization that will break even financially, it is important to make sure that the resources for mail service are clearly delineated from package delivery, with the costs understood in each area and prices set accordingly.

There is abundant evidence that is not occurring today, including the increase in mail delivery times.