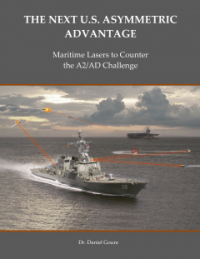 The United States Navy is confronted by an expanding array of both qualitative and quantitative threats to its ability to conduct its fundamental missions of forward presence, sea control, power projection ashore and defense of the global commons. The proliferation of advanced, long-range anti-ship missiles, particularly when coupled to a robust C4ISR system, is complicating operational planning and could, in the event of hostilities, deny the Navy the ability to operate in critical parts of the world’s oceans. Even individually less capable threats such as fast attack craft and armed unmanned aerial vehicles could seriously drain inventories of defensive weapons.

Directed energy systems, including solid-state and fiber optic lasers and the electromagnetic projectile launcher, have the potential to help address these threats as well as perform additional high value missions. The inherent characteristics of laser weapons, speed of light engagement, precision targeting, rapid shot generation and tunability, offer the opportunity for expanded engagement options against a range of threats. These features can enhance the ability of naval units to defeat large raids and to counter short time-of-flight threats such as rockets, mortars and artillery shells. Equally important, laser weapons could bend the cost-exchange curve between offensive and defensive systems that appears at present to favor the former over the latter. When not employed as a weapon system, the inherent electro-optical/infrared properties of laser weapons could be used as a high fidelity intelligence, surveillance and reconnaissance sensor. Maritime laser weapons (MLW) have the potential to help counter the range of threats the Navy will have to confront.

The first generation of deployed naval directed energy weapons may be just around the corner. The Navy’s Maritime Laser Demonstrator (MLD) was able to track and defeat small surface targets. This year, the Navy will deploy the MLD at sea, on the USS Ponce, tying the laser into shipboard combat and power systems. The Navy’s near-term goal for the prototype system is 30 kilowatts (kW) with an objective power level of around 150 kW by 2016. At this power level, a laser weapons system would be capable of addressing the threat posed by unmanned aerial vehicles, small boats, rockets, artillery and mortars. It is a relatively short leap from the Navy’s 150 kW technology demonstrator to a fully capable directed energy weapon. Based on progress to date, the Navy could have a fully capable laser weapon deployed within a decade.

The requirement for a transformational capability such as the MLW is clear. Progress on the technology has been significant; with the completion of the prototype MLW system the technology readiness level for the critical technologies will be a seven out of ten. Given the Navy’s clear need for directed energy weapons, and should the ongoing technology development efforts mature, the Navy needs to be prepared to rapidly transition to a program of record. This means planning for the necessary funding in the fiscal 2016 budget, formulating the appropriate requirements documents for a naval laser weapon and developing the detailed architectural plans to deploy weapons aboard both current and future surface combatants.