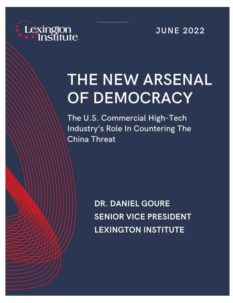 The character of the international order is changing. These changes encompass all elements of national power – economic, technological, social/cultural, political, and military. The United States and its democratic friends and allies are facing a host of challenges to every dimension of their security. They are facing both traditional challenges, such as the proliferation of nuclear weapons, and new ones, such as the competition in advanced technologies.

Central to the changes occurring in the geo-strategic environment is the emergence of a set of advanced dual-use technologies which the world’s leading nations are struggling to understand, attain, and master. Senior U.S. defense officials have identified the specific technologies that are most critical to future U.S. military superiority. These include artificial intelligence (AI), machine learning (ML), quantum technology, 5G/6G communications, microelectronics, extended reality, cybersecurity, and the Internet of Things.

The Department of Defense (DoD) sees the key to future military advantage as arising from the ability to acquire, move, and use information faster and better than prospective adversaries. These technologies are providing major improvements in the performance, reliability and supportability of military platforms and weapons, and when fully integrated, will be transformational.

In order to achieve this military transformation, DoD knows that it must invest in this set of advanced technologies as part of the nation’s deterrence strategy as well as to ensure the ability to project and deliver force power as needed. Advanced technologies such as AI are already critical to the U.S. effort to maintain an advantage in intelligence, command and control, and connecting sensors to shooters. These capabilities will provide the U.S. military with the ability to see, understand, decide, and act faster than an opponent, thereby enabling the U.S. military to deter conflict or, should it occur, prevail.

Unlike the Cold War, when government-led and financed R&D led to the development of a host of dual-use advanced tech, today the U.S. is dependent on the advanced technologies produced by commercial companies for the military advantages it seeks. Private companies are now the overwhelming source of critical high-tech products and services used by the U.S. military.

Beijing too sees investments in advanced technologies as the key to establishing global preeminence, military superiority, and an international order more congenial to the Chinese Communist Party’s (CCP) political and social values. It is already applying elements of advanced technology, particularly AI, cloud data storage, and 5G networking to create apps that track the behavior of its citizens. The implications of China’s “high-tech” campaign for the U.S., its way of life, freedoms, economic welfare, and military security, are profound.

It is Beijing’s strategy to become dominant in advanced technologies such as AI within a decade. It has also designated so-called national champions, ostensibly private companies that it expects to dominate in these areas. The Chinese government provides direction and financial support to these national champions and encourages them to acquire Western intellectual property (IP). Because Beijing doubts it can match the U.S. in technology and speed of innovation, it also engages in a broad program of espionage to secure both private and government/classified IP. As has been the case in numerous other areas, Chinese national champions are compelled to collaborate with more advanced foreign companies until they can dominate a sector.

U.S. leaders now recognize the importance of investing in these advanced technologies. We are in a race, but it is not clear where we are in this race. Some observers believe the U.S. is only a few years ahead of China in the development of critical technologies. Others believe we are already behind in at least some of these. If China wins the race to develop and deploy advanced technologies, the consequences for the United States and the Free World would be profound and possibly catastrophic. Were the United States to lose this technology “high ground,” the effects would be slower U.S. economic growth, the loss of manufacturing capability, reduced employment, and an increase in the imbalance of international trade. China’s government could use the technology dominance of its private firms to control global networks, influence national politics, and shape international values in ways hostile to Western interests and practices. The loss of U.S. technology dominance also would undermine national security, creating the potential for this country and its allies being held hostage to Beijing’s military threats.

Like China, the U.S. has a set of leading companies developing advanced technologies. These private sector companies are focused on the commercial uses of these technologies, but success in these strategic technology areas will greatly benefit U.S. national security needs as well. It is clear that the U.S. is dependent on the products and services created by these companies to provide the military and Intelligence Community (IC) with critical capabilities at an affordable price.

Unlike its chief competitor, the U.S. does not have a strategy for supporting and leveraging its national technology powerhouses, even though it depends on them to supply advanced capabilities to industry, consumers, and the U.S. military. Instead, the United States should support and leverage these commercial companies as this country’s new Arsenal of Democracy.

But instead of support and collaboration, there are several efforts underway to hamstring these technology powerhouses, restrict their ability to innovate, and thus hand over critical corporate IP to Chinese rivals. A series of antitrust bills working their way through Congress would have a devastating impact on the ability of U.S. advanced technology companies to create value and wealth; support the creation of new businesses; invest in new, transformative capabilities; develop the kind of foundational technology that will help the US military maintain superior decision-making; support an open and accessible internet; and indirectly, counter China’s efforts to impose its values and controls over the global information architecture.

In considering pending antitrust legislation Congress should, at a minimum, give serious consideration to the harm these bills may cause to national security. It should seek the input of both the Department of Defense and the Intelligence Community regarding the national security implications of the proposed legislation. This paper is intended to provide the legislative branch with a broad perspective on the overall importance of advanced commercial technologies beyond military superiority, the state of play between China and the U.S. in these technologies, and the potential impact of pending antitrust legislation on our national security and economy.