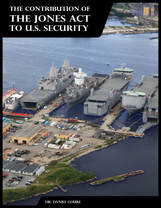 The United States has always had a special relationship to water. It is a nation founded from the sea. Its interior was explored and linked to the sea via mighty rivers and waterways that penetrate deep into the continent’s interior. Seaborne commerce drove the American economy for two centuries; even today that economy is dependent on the sea to carry virtually all the $3.5 trillion in international trade generated annually. Millions of Americans have made their livings from the seas and national waterways. The security of the seas, part of the global commons, has been a central theme of this country’s military strategy since the days of the Barbary pirates.

From Athens and Rome to Great Britain and the United States, the great seafaring nations have built strong maritime industries, merchant marines and navies. These three components of seapower are interrelated. A maritime industry is vital to the ability to build ships, including naval vessels. The merchant marine is what carries goods to and from this country in both peace and war. A strong Navy secures the oceans for U.S. seaborne trade and access but is dependent on the industrial base to produce new vessels and repair existing ones.

The importance of a national maritime industry and merchant marine was recognized in law as far back as 1920 when Congress passed Section 27 of the Merchant Marine Act, also known as the “Jones Act.” Only vessels conforming to the provisions of the Jones Act are permitted to carry passengers or cargo between two U.S. ports, a process also termed “cabotage.” All officers and 75 percent of the crews of vessels engaged in cabotage must be U.S. citizens, with the remainder being citizens or lawfully admitted aliens. These vessels must be built in the United States, owned by U.S. citizens, and flagged or operated under the laws of the United States.

The greatest danger to the role and function of the United States as a seafaring nation is the decline of its maritime industry and merchant marine. Commercial shipyards have made significant investments to modernize, and turn out high-quality vessels with advanced engineering. Today, hundreds of seagoing vessels from larger container ships to tankers and barges and world class deep-ocean drilling platforms are built every year. The projects keep American shipyards in operation, employing approximately 100,000 skilled workers. Moreover, tens of thousands of merchant mariners are at work every day as a consequence of the Jones Act. As a result, the nation retains the means to build and repair Navy vessels, and provide critical sea lift for the military.

Ninety years after it became law, the Jones Act continues to be vital to national security needs. In the face of continuing low-cost subsidized foreign competition, real world economics would dictate that the U.S. shipbuilding industry would decline. Without the Jones Act, the United States would face the danger of a rapid decline in its merchant marine fleet. It would then be required to provide massive subsidies to that industry, pay exorbitant prices for naval vessels and rely on foreign-owned or flagged vessels to carry critical military cargoes or to build and maintain at great expense a unique, government owned fleet of cargo vessels. Finally, because Jones Act vessels must conform to U.S. laws and have U.S. crews, waterborne transportation is reliable and the homeland is more secure.