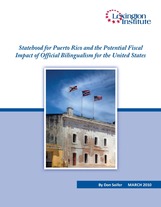 Recent developments have advanced the likelihood that voters in Puerto Rico may soon vote on a sequence of ballot initiatives that could result in the granting of statehood status. Should Puerto Rico become the 51st state, a number of issues with major implications for both Puerto Rico and the United States would need to be addressed, including significant tax issues.

Puerto Rico, which received $18 billion in direct federal expenditures in FY08, has a population with a median national income of $17,741, nearly a third below that for the United States. While eligibility for many major federal social programs is the same in both jurisdictions, others, like the Food Stamp Program, including different eligibility requirements. This would like result in increased federal expenditures should statehood be achieved, but a lack of comparable data makes cost projections for such changes difficult.

Canadian bilingualism, which is often attributed to versions of its Official Languages Act, is in actuality based on a many-layered framework of laws, traditions and regulations. Particularly over the past four decades, each element of this framework has added specific requirements and responsibilities. A 2009 study by the Fraser Institute concluded that the annual cost of this system of bilingualism was between C$6 billion and C$1.8 billion in 2006, or C$55 per Canadian.

What would be the potential costs and implications should statehood for Puerto Rico result in establishing a Canadian-style system of bilingualism in the United States? Through a series of calculations and estimates, this report arrives at a projected total cost of $25.661 billion, or $85 per American.