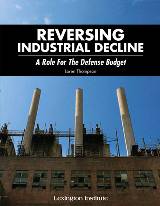 After dominating global industrial activity for a century, the United States is losing its edge in manufacturing to other nations. Over the last 30 years, manufacturing has fallen from a quarter to an eighth of the domestic economy, while the share of manufactured goods consumed in America but produced by foreigners has risen from a tenth to a third. The decline of U.S. manufacturing is reflected in record merchandise trade deficits, the loss of over 40,000 manufacturing jobs every month in the current decade, and the shrinking role of American producers in global industries such as electronics, steel, autos, chemicals and shipbuilding.

U.S. manufacturers continue to generate over 20 percent of global industrial output and have increased productivity by a third in this decade, but if current trends continue America will cease to be the biggest manufacturing nation in the near future. Many factors have contributed to the slippage in U.S. standing, including high corporate taxes, burdensome regulations, globalization of the economy, and the efforts of trading partners to protect their economies. Manufacturers frequently cite the failure of public schools to adequately prepare students for jobs in modern manufacturing. However, the nation’s declining industrial competitiveness appears to be caused mainly by problems outside the educational system and scientific community.

If the erosion of U.S. manufacturing persists, America will become more dependent on offshore sources of goods and the nation’s trade balance will weaken. That will undercut the role of the dollar as a reserve currency and diminish U.S. influence around the world. The economy will be less capable of supporting major military campaigns and less resilient in the face of market reverses. Most profoundly, America will become poorer relative to other nations, a trend that the National Intelligence Council says is already under way in its most recent assessment of global trends.

Reversing America’s industrial decline will require many changes in policy, particularly with regard to the taxation and regulation of manufacturing enterprises. One tool available to policymakers is the defense budget, which was used throughout the Cold War to stimulate industrial investment and technological innovation. However, the federal government currently lacks mechanisms necessary to coordinate defense spending with economic policies, and as a result military outlays seldom boost the U.S. economy as effectively as they do in other industrialized nations.