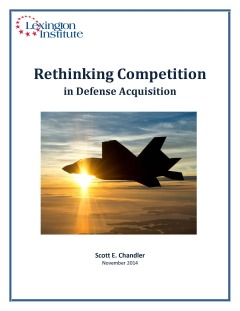 In its 2014 Annual Report, Performance of the Defense Acquisition System,[i] the Department of Defense (DoD) states “Competition is the single best way to motivate contractors to provide the best value”. Frank Kendall, Under Secretary of Defense for Acquisition, Technology and Logistics (AT&L), reiterated that view in his August memo on actions to improve DoD competition.[ii]

The defense department correctly asserts that competition is a powerful tool for achieving cost effective acquisition. It knows also that competition can encourage research and innovation; new services, products and uses; and increase quality, reliability and performance from suppliers. But these benefits depend on a market sufficiently appealing to attract more than one bidder.

Competition is a critical strategy in DoD’s draft Better Buying Power 3.0 (BBP)[iii] as it has been in each iteration. DoD sets strategic goals for competition, but consistently fails to achieve them. Competition rates have declined from 63% in 2008, to 57% in 2012.[iv] National Defense magazine observed “It is not unusual to see dozens of contractor representatives turn up at an ‘industry day’ to hear about a new opportunity. But after the actual solicitation is published, very few might end up submitting bids”.[v]

Kendall attributes the decline primarily to decreasing defense budgets and fewer competitive opportunities, but it is more clearly DoD’s own acquisition policies that too often fail to attract bidders. The Defense Business Board (DBB) observed that “DoD lacks sufficient understanding of business operating models and drivers of innovation.”[vi] DoD consistently fails to appreciate the connection between policy, DoD buyer behavior, and results. Predictably, competition rates continue to fall.

DoD’s approach continues to be self-centered – focusing on internal metrics, and establishing and enforcing policy. DoD’s mantra for competition fails to consider RAND’s conclusion that “In some cases (especially in the procurement of major systems where the nonrecurring cost is large), it may be less costly for the government to forgo competition and to rely on a single supplier.”[vii] Competition takes time, and since in the defense acquisition monopsony, government is the only important buyer, and usually must fund the development of all potential entries in a competition, it is not at all clear that competition saves money when nonrecurring costs are high or production runs are low. Even so, competition can serve other objectives such as keeping critical design teams and research in place to ensure a healthy industrial base, and a viable pool for future critical acquisition needs.

DoD’s mantra for competition violates its own fundamental principle that the “first responsibility of the acquisition workforce is to think.” Since the ultimate mission of acquisition is not achievement of a tertiary metric of debatable value, DoD must rethink competition as one of multiple tools available to equip DoD to effectively execute the defense of this country at the least possible cost in lives, time, and treasure.

[ii] Guidelines For Creating and Maintaining a Competitive Environment for Supplies and Services in the Department of Defense, Office of the Under Secretary of Defense for Acquisition, Technology, and Logistics, August 2014.

[vi] Innovation – Attracting and Retaining the Best of the Private Sector, Defense Business Board, July 2014.

[vii] Mark V. Arena and John Birkler, Determining When Competition Is a Reasonable Strategy for the Production Phase of Defense Acquisition, RAND Corporation, 2009.