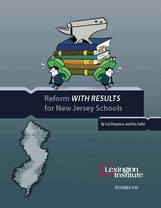 New Jersey’s court-ordered strategies for fixing fundamental shortcomings in educational quality in the state’s poorest schools have produced aggressive increases in state funding. But the quality of education in most of these schools has not improved commensurate to this spike.

In the late 1990s and early 2000s, the New Jersey Supreme Court issued a series of decisions, mandating a dramatic increase in public support to the state’s poorest – and poorest performing – school districts, known as “Abbott” districts. These decisions did not just demand an increase in public expenditures; they also scripted how the schools would reform, through a series of management, curriculum, and even staffing mandates.

Of the Court’s mandates, one did unfold fully: the state’s neediest districts have received dramatic injections of financial resources. For perspective, between 1997, when the Court ordered the state to fund Abbott districts at the same level as the state’s wealthiest districts, and 2007, state aid to the 31 Abbott districts increased from $8,577 per pupil to $14,394 – an increase of 75.8 percent in just ten years.

On the other hand, the Court’s other goal, to close the achievement gap for poor and minority children through a litany of prescriptive mandates, has failed to produce needed results. The skyrocketing expenditures for New Jersey’s public education system have not spurred equal academic performance gains for students. In fact, these bloated public expenses mostly benefit the thousands of adults who control the system, instead of the hundreds of thousands of children who depend on the system for an education.

Despite the influx of money poured into its neediest school districts, 83 percent of black eighth graders in New Jersey are not reading at proficient levels as of 2009. Despite modest improvements, it is clear that the burgeoning public spending and the inexcusably low student achievement rates found in New Jersey’s urban school districts make the state ripe for fundamental reform that can provide worthwhile new options for families.