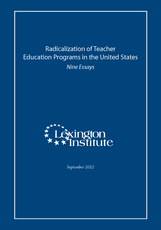 These nine essays chronicle prominent examples where the advancement of radical agendas has displaced the development of subject-content mastery in America’s schools of education.

Institutional racism, redistributionist ideology, resisting oppression, and equipping teachers with the tools to transform their students’ perspectives – each of these factor heavily into the entrenched indoctrination to which many education school candidates must prepare to expose themselves. Reading lists of prospective teachers are top-heavy with near-cult figures for the Left, such as Brazilian Marxist Paulo Freire and revisionist historian Howard Zinn. The examples described in this paper are steeped in these and other agendas.

Proponents of these agendas are not difficult to find within education school communities. And at national and regional conferences held by organizations like the Institute for Research on Race and Public Policy and the National Association for Multicultural Education (NAME), workshop titles and painted banners proclaim their intentions in bold strokes.

Many who attend these conferences do so using taxpayer funding, and are able to satisfy professional development requirements toward becoming “highly qualified teachers.” The conferences are co-sponsored by entities that receive funding presumed to ensure that the nation’s elementary and secondary educators are equipped with the knowledge of their craft and the content they will be teaching. For instance, the 2011 NAME national conference was cosponsored by the National Education Association (the nation’s largest teacher union), Northern Illinois University and the University of Michigan.

In that conference’s keynote address, radical educator William Ayers challenged his audience, “How do we resist the oppression we find all around us?” He led the crowd in applauding the Occupy movement protestors who had shut down the Port of Oakland days earlier, and he bemoaned “the triumph of corporate power.”

NAME President Christine Sleeter followed, also expressing solidarity with the Occupy movement and its “linking capitalism with international racism globally.” She asked, “How do we (NAME) build a more powerful social movement?”

Their audience, which included educators and administrators from public school districts and some two dozen public universities enrolled in the conference, applauded with enthusiasm. Over a week in downtown Chicago, they attended workshops, film screenings, and lectures. And despite enjoying the session with help from taxpayer funding while satisfying teacher training requirements, there was no evidence to be found that the proceedings would inform their own knowledge of history, mathematics, or the teaching of reading.

This collection of essays addresses nine representative examples of radical agendas found in teacher preparation programs in the United States. Some discuss authors, most notably Paulo Freire and Howard Zinn, who remain broadly popular across schools of education, and whose work is regularly assigned as required reading in even the most prestigious.

Others discuss more recent trends, such as the increasing pressures to radicalize early childhood education by introducing the teaching of social justice, gender identity, and “unlearning racism” to three and four year olds. Still others among the topics discussed here (Critical Race Theory, Transformative Learning and Social Justice Education) have gained popularity on higher education campuses over the past thirty years, while K-12 teacher candidates continue to be exposed to indoctrination campaigns as part of their preservice training.

It is an unfortunate, but well documented, reality that this training too often includes only minimal formal instruction in the subject areas for which aspiring teachers will be responsible once they take charge of classrooms of their own. Lacking in basic knowledge they could have gained studying the subjects they will teach leaves many teaching candidates under-equipped to address the well-documented, worrisome decline in student levels of skills and knowledge in American public schools.