First Class Mail has contributed half the revenue it generates to the U.S. Postal Service’s institutional overhead for each of the past three years. In 2010, Standard Mail contributed one-third of its overall revenue to general overhead (see graph below). These constitute the two largest classes of mail in terms of revenue, and both are classified as market-dominant products under the Postal Accountability and Enhancement Act of 2006.

On the other hand, only one-fourth of total revenue generated by Priority Mail went to fund the same institutional overhead in 2010. Priority Mail is the largest of the categories that legislation defines as competitive products.

Postal Service management has considerable flexibility in setting the pricing for competitive products. Data for 2011 is expected to be released in the coming weeks.

Early in 2012, the Postal Regulatory Commission will undertake a congressionally-mandated review of the pricing of USPS competitive products and their appropriate level of contribution to institutional costs. As Postal management continues to emphasize Priority Mail and other competitive products in its advertising and business plans, this analysis underscores the increasing importance of ensuring that monopoly consumers are not being asked to pay more than their fair share of organizational overhead.

Pulling Their Weight: Percentage of Revenue Devoted to Institutional Cost 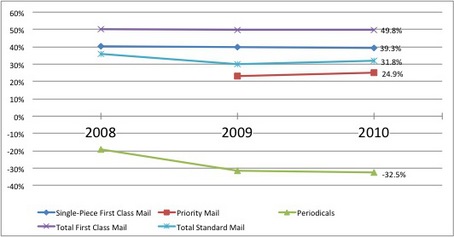 In FY 2011, the U.S. Postal Service lost $5.1 billion, despite a net income gain of $590 million in the fourth quarter — the first positive quarter for the Service since Q4 FY 2009. The positive quarter stemmed from the congressionally authorized delay in the planned payment of $5.5 billion to the Postal Service Retiree Health Benefits Fund. Without this deferment, the Service would have finished FY 2011 with a loss of $10.6 billion — $2.1 billion more than it lost last year.

The Service’s operating revenue declined $1.34 billion, or 2.0 percent relative to FY 2010. Overall mail volume declined by 168 billion pieces in 2011, down 1.7 percent — or three billion pieces — from the previous year. The loss of mail volume was driven primarily by a five-billion-piece decline in First Class Mail — extending a trend for the Service’s most profitable product that began in 2006.

The Postal Service is contemplating several new services, including digital currency and USPS-branded email. Expansion into these areas is not without controversy, as it could put the Postal Service in conflict with current legal requirements or in direct competition with private-sector firms.

Despite a total volume loss of 1.7 percent and a 2-percent decrease in overall operating revenue compared to the same period last year, some categories of mail posted increased revenues.

Standard Mail continued the upward trend begun in 2009 with a volume increase of 2.9 percent. With overall volume of 8.46 billion pieces, the product now accounts for 50 percent of all mail volume. However, First Class revenue, which accounts for 49 percent of the Service’s overall mail revenue, declined 5.8 percent in FY 2011.

Recent price increases in both 2010 and 2011 drove a 6.3-percent increase in Shipping Services revenue. Shipping Services include Priority Mail, Express Mail, Bulk Parcel Post, and Bulk International Mail. Despite the rate hike, total volume for this product rose 84 million pieces, or 6 percent. In FY 2011, prices in this category were raised an average of 3.6 percent.

In September 2011, to avert a potential USPS default, Congress postponed the Postal Service’s mandated payment into the Postal Service Retiree Health Benefits Fund. This decision temporarily saved the Service $5.5 billion in losses. Despite this and aggressive efforts to trim work hours and reduce the Service’s work force, labor costs continue to spiral out of control and hinder attempts to reduce operating expenses.

The USPS Inspector General concluded in a recent report that the Postal Service could save at least $335 million in workers’ compensation expenses by adopting cost-cutting techniques employed in the private sector. For example, instead of offering full reimbursements to employees for brand-name drugs, the Service could limit reimbursement to generic equivalents — saving nearly $9 million each year.

Postal Service employees account for more than one-third of the federal employees receiving disability compensation. According to a report in the Federal Times, 928 of the 16,200 disabled USPS employees were over the age of 80.

Over the last decade, First Class Mail volume has slid nearly 25 percent. Ninety percent of the country’s mail is now commercial material. And with nearly 80 percent of Americans online — and 92 percent of those folks active users of email — the use of paper mail by both businesses and individuals will no doubt continue to decline.

As American Enterprise Institute scholar Rick Geddes recently wrote, “[T]he composition of the mail has changed dramatically. The Post Office’s original public mission of ‘binding the nation together’ is patently obsolete when people around the world can communicate instantly via the internet, and receive only catalogs and advertisements by mail.”

USPS is consequently attempting to join the digital revolution. The Inspector General recently released a report (“eMailbox and eLockbox: Opportunities for the Postal Service,” November 14, 2011) presenting the case for a USPS-branded e-mail service called the “eMailbox,” which would “provide a unique online identity to every citizen and business” by linking a physical address to an electronic one.

A second service discussed in the report, called the “eLockbox,” would provide “added security for the archiving of important legal and personal documents.” Together, the Service believes these services reflect an extension of the Postal Service’s role linking American households and business in a secure, private communications network.

The Service believes its Address Management System and National Change of Address System could be successfully leveraged to support an “eMailbox” database that the Service would manage. USPS management believes that the Department of Homeland Security standards that it is required to abide by set a strong foundation for providing a secure service that would also be adequately backed up to prevent data loss.

USPS also is looking to expand its money-transfer services by offering prepaid cards to service those who do not have access to mainstream banking services or who currently do not use digital currency.

Under current law, the Service is restricted from providing non-postal services. But the Inspector General’s report suggests that prepaid cards could be considered a postal service if classified as an extension of existing money-transfer services or if offered to federal agencies as a way to provide government benefits to unbanked citizens.

USPS has waded into the financial services waters in the past, with poor results. Between 1995 and 1997, USPS lost $85 million on new initiatives as e-commerce, electronic money transfers, and remittance processing, according to the Government Accountability Office. In 2001, the GAO reported that none of the Postal Service’s electronic commerce initiatives were profitable — and that the Service’s management of these efforts was fragmented and incomplete.

“[T]he composition of the mail has changed dramatically. The Post Office’s original public mission of ‘binding the nation together’ is patently obsolete when people around the world can communicate instantly via the internet, and receive only catalogs and advertisements by mail.”