The U.S. Postal Service suffered a net loss of $3.1 billion in the third quarter of FY 2011 — $398 million less than it lost in the same period last year. Operating revenue of $15.8 billion declined 1.7 percent relative to Q3 FY 2010. Overall mail volume also declined this quarter and is forecast to fall by 3.5 billion pieces — or 2 percent — this fiscal year, led by a projected 6.5-percent decrease in First Class Mail.

The Service is on track to reach its statutory debt limit of $15 billion at the end of the fiscal year, on September 30, 2011. Despite efforts to trim operating costs, USPS claims that it will be unable to make a required $5.5-billion payment to its Retiree Health Benefits Fund. Since the trust fund was established in late 2006, the Postal Service has contributed more than $37 billion.

In the name of averting bankruptcy, USPS asked Congress to allow it to deliver five days a week rather than six, to close unprofitable post offices, to relax delivery timelines, and to exercise greater control over its workforce, including through withdrawal from federal retirement and healthcare plans.

With Congress considering at least four different proposals and the White House yet to weigh in publicly, the outcome remains far from clear. “The hard truth is that if nothing is done, the Postal Service is going to lose $10 billion a year,” warned Senate Postal Subcommittee Chairman Tom Carper (D-Del.).

Total mail sent and received by households fell by 4 billion pieces in 2010, after a decline of 18.9 billion in 2009, continuing the downward trend begun in 2002.
First Class Mail accounts for much of the decline. In 1987, the average American household received 8.64 pieces of First Class Mail per week. In 2010, that figure was down to 7.78 pieces.

By 2020, overall First Class Mail volume is projected to fall to 39 billion pieces.

As Sen. Susan Collins (R-Maine) notes, that would represent a 50-percent decline in First Class volume over the past decade.

Sen. Tom Coburn (R-Okla.) told a September 2011 Senate hearing that he believes those projections are too optimistic. “We’re sitting here working with numbers of 39 billion pieces of mail, of First Class Mail,” he said at a congressional hearing in September 2011. “And I would bet you a thousand dollars right now, Mr. Postmaster, that it won’t be half that nine years from now.”

In 2010, the average household sent 2.8 pieces of mail per week, down from 3.0 pieces of mail in 2009 and 3.7 in 1987. If every American household sent three more letters or cards per month, then Postal Service revenue would grow by approximately $1.9 billion, roughly 3 percent of total USPS operating revenue. (See graph.)

“We’re sitting here working with numbers of 39 billion pieces of mail, of First Class Mail. And I would bet you a thousand dollars right now, Mr. Postmaster, that it won’t be half that nine years from now.”

Despite a total volume loss of 2.6 percent and a 1.7-percent decrease in overall operating revenue compared to the same period last year, some categories of mail posted increased revenues. Standard Mail revenue was up 1.7 percent, Package Services increased by 3.2 percent, and Shipping Services improved by 7.3 percent.

First Class Mail revenue declined $485 million — or 5.9 percent — in Q3 FY 2011. USPS believes that Standard Mail volume and revenue will continue to rise, but because this category of mail generates a third as much profit as does First Class Mail, growth in Standard Mail will not be sufficient to replace declining First Class revenue.

This quarter, work-hours fell by 9.2 million, and more than 1,850 administrative employees voluntarily retired as part of the agency’s restructuring effort.

To a large degree, the Postal Service is relying on Congress to deliver it from its fiscal woes. The agency claims that $115 billion of the losses it faces over the next decade are unavoidable without fundamental legislative changes. Should the necessary changes be signed into law, postal management would still need to act to translate the changes into actual savings.

With several pieces of legislation pending that differ in their approaches to some fundamental questions, it remains unclear whether an agreement can be reached which would adequately address the Postal Service’s dire long-term situation or whether Postal Service management would be able to leverage the Congressional reforms to restore viability.

The major issues Congress is weighing include whether to eliminate one day of delivery per week, whether and how to close post offices, and how to deal with overpayments the Postal Service has made to federal pension plans since it became an independent agency in 1971, according to analyses by the Postal Service Inspector General and the Postal Regulatory Commission.

Two competing proposals in the Senate — one from Sen. Collins, the other from Sen. Carper — would grant the Service access to its purported overpayments into the Civil Service Retirement System (CSRS). Sen. Collins has noted that the funds could go toward postal debt, after the RHBF has been fully funded.

Of the two bills introduced in the House — one by Oversight and Government Reform Chair Darrell Issa (R-Calif.) and the other by Rep. Stephen Lynch (D-Mass.) — only Lynch’s parallels the Collins/Carper approach to overpayments.

Both Carper and Issa would permit the Service to reduce delivery to five days per week; Collins would not. Carper and Issa have also adopted a more aggressive approach to the closure of postal facilities.

The Obama Administration is pushing for a delay on the $5.5 billion USPS owes to the PSRHBF and would like to grant the Postal Service access to $7 billion in overpayments to the FERS pension fund. The plan would use that money to offer early retirements.

The Administration would also like to give the Postal Service the authority to raise stamp prices by two cents without seeking the Postal Regulatory Commission’s approval. Like Issa’s and Carper’s plans, the President would permit the Service to eliminate Saturday delivery.

According to the White House, its plan would free up $20 billion for USPS.

“Even with growth in our package business, we cannot replace the profit contribution of First-Class Mail that has been lost over the past few years and will continue to decline in the future.”

The Postal Service deposits net income from competitive products like Express and Priority Mail — after subtracting required contributions toward institutional costs and paying its putative “income tax” on revenue from competitive products — into a Competitive Products Fund established by the 2006 Postal Accountability and Enhancement Act. The Fund also holds interest and dividends accrued on that net income.

Since 2006, nearly $656 million has been deposited into the fund as net income; dividend and interest income on those profits has amounted to nearly $250 million.

USPS says that it may access the money in the same way that it accesses assets in the general Postal Service Fund. With the Postal Regulatory Commission set to review cost coverage rules for competitive products, a discussion of how deposits in the Competitive Products Fund will be used would be timely.

Given the agency’s staggering financial obligations, policymakers may consider requiring the Postal Service to use the proceeds of the Fund to pay down its debt.

In FY 2010, competitive products contributed $2.5 billion, or 7.1 percent, to institutional costs, surpassing the 5.5 percent minimum contribution required by the PRC. But because First Class Mail and Standard Mail typically contribute a substantially greater share of their revenues toward overheard than do competitive products, some observers have questioned whether these disparities are fair to customers of market-dominant products and services. 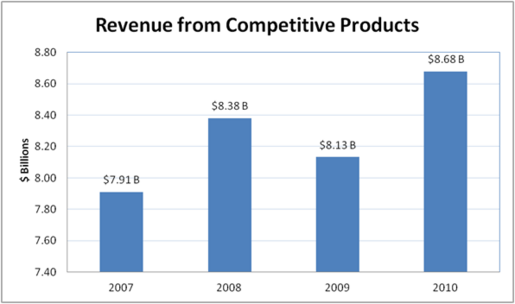