The U.S. Postal Service (USPS) lost $354 million in Q1 FY 2014 — the 19th money-losing quarter of the prior 21. Still, the loss represents a significant improvement over the $1.3-billion loss posted in the same period last year. 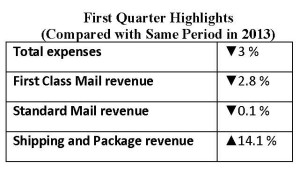 But this revenue growth was not enough to offset losses from declining First-Class Mail volume.

First-Class Mail consumers continue to pay a disproportionate share of institutional costs, contributing significantly to overhead in 2013 despite declining service quality. Stamp prices increased by 6 percent in January 2014, while prices for competitive products rose by 2.4 percent.

On January 26, 2014, USPS increased stamp rates by 6 percent on most monopoly mail products, more than triple the 1.7-percent inflation-rate price cap mandated by law except in “extraordinary or exceptional circumstances.”

First-Class Mail users continue to pay disproportionately more toward institutional overhead — that is, expenses for overall operations not directly or indirectly attributed to a mail product — than do users of competitive products. And the disparity is increasing, according to the Postal Service’s cost-coverage metric. Cost coverage represents the percentage of a product’s attributed cost to which its revenue is applied. So a product with cost coverage of 100 percent takes in revenue equal to its costs. Nearly half of all Postal Service expenses are not attributed to specific products, and are classified as general, institutional overhead. 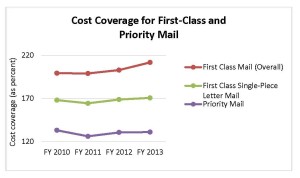 While costs to monopoly consumers increased, service quality declined on the products they used.

The agency’s performance was worse for single-piece First-Class Mail with two- and three-to-five-day delivery standards. Just 94.2 percent of single-piece First-Class Mail with a two-day standard made it to its destination on time — 1.9 percentage points worse than last year. And just 85.1 percent with a three-to-five-day standard was delivered on time, a decline of 8.3 percentage points from the same period last year.

These first-quarter delivery results come on the heels of numbers for 2013 that fell below expectations. USPS did not meet its goal of delivering 96.7 percent of single-piece First-Class Mail with an overnight service-standard requirement; it missed by 0.6 percentage points. Overnight delivery performance in 2013 was 0.4 percentage points worse than in 2012.

The Postal Regulatory Commission reported results that vary slightly from these numbers.

In December 2013, the Postal Service launched Metro Post, a same-day delivery service, in the New York district. Customers that make purchases through select retailers online or in-store by 2 p.m. can receive their orders between 4 p.m. and 8 p.m. the same day.

Metro Post’s move to New York City follows an unsuccessful trial run in San Francisco, where the Postal Service signed up six retailers, including 1-800-FLOWERS, and delivered 95 packages in five months. According to the Postal Regulatory Commission, USPS expected total revenue from the market test to exceed $10 million. The Office of Inspector General found that USPS “did not properly implement the pilot,” and lacked sufficient participation from its customers, which included only one large retailer. The Postal Service suspended the San Francisco same-day service trial in March 2014.

Postmaster General Patrick Donahoe stated, “[Same-day delivery] has caught on like wildfire in New York. We have a whole group of customers there.” The market test in New York City is expected to continue until December 16, 2014.

USPS also expanded its trial of gopost lockers, which can be used to receive and ship packages, to New York City in early February 2014. The gopost program first launched in February 2012 with the deployment of seven lockers, six of which were installed at post offices, in the Washington, DC metropolitan area. Six more lockers were installed at shopping centers later that year, bringing the total number of gopost locations in the metro area to 13.

To use gopost, customers must first register for a personal identification number online. After receiving a gopost access card in the mail, customers can use their personal identification number and gopost card to ship and receive Priority Mail, Priority and Mail Express packages, as well as package types that are at least 3/4″ thick at any of gopost’s secured lockers, 24 hours a day, seven days a week. Non-Priority letters or flat-sized envelopes less than 3/4″ thick, as well as packages with extra services such as Special Handling or Certified Mail, cannot be received or shipped. Parcels that are not picked up within 15 days are returned to sender.

USPS plans to deploy up to 300,000 new hand-held devices by the end of this year. Mail carriers will use these mobile devices to clock in for work, inspect their vehicles, scan and geo-tag packages, determine routes, and track address changes. The new scanner technology will allow USPS’s call center to send text messages to mail carrier employees regarding customer-reported changes and problems in real time. Postmaster General Patrick Donahoe also suggested USPS may expand into credentialing services with the new technology. Using the hand-held device, postal carriers could take photos of customers, geo-tag them, and use the photos for identity verification.

The Postal Service has also invested significantly in infrastructure. USPS recently installed new scanners in all its processing centers. The Postal Service set a year-end goal to install technology at every post office that allows a simple scan of a package to reveal its route. Chief Information Officer Jim Cochrane stated, “There is a lot of investment going on, and we think we are really investing for the future . . . We are going to add billions of packages to our network.”

Recent technology investments have allowed USPS to expand seven-day package delivery to New York City, Los Angeles, and parts of Texas and the mid-Atlantic. In order to offer Sunday delivery efficiently, the Postal Service replaced all its tracking systems in the last two years and “increased tracking events five times.” Cochrane stated, “We had to fix our technology. We really are making a billion-dollar bet on the future in the shipping business.” If all goes as planned, USPS will offer seven-day package delivery to 80 percent of the U.S. population.