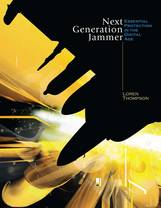 Electronic devices dominate modern combat. Warfighters depend on access to the electromagnetic spectrum to communicate with friendly forces, track enemy movements, navigate in the fog of war, collect intelligence, and perform many other vital functions. Electronic warfare is the military specialty concerned with denying enemy forces use of the spectrum while assuring that friendly forces have unfettered access.

Airborne jammers are essential to the successful conduct of most electronic warfare missions. Jammers are used to prevent enemy radars and communications devices from functioning effectively by dominating the frequencies in which such systems operate. This is accomplished by either overpowering the transmissions of hostile emitters or manipulating traffic on the spectrum to confuse enemies. Jammers can also be used to prevent detonation of improvised explosive devices and accomplish more exotic information operations.

The U.S. Navy is the lead service in providing electronic warfare capabilities to the joint force. The main electronic warfare aircraft in the joint fleet today is the EA-6B Prowler, which has been upgraded many times since its inception in the 1970s. The Prowler is being replaced by a more capable variant of the carrier-based Super Hornet designated the EA-18G Growler. However, initial versions of the Growler will carry the same Cold War jamming system used by the Prowler.

The current jamming system has served the joint force well, but it cannot keep up with emerging dangers. It lacks the capacity to cope with numerous threats at the same time, the power to address distant emitters, and the precision to avoid impeding transmissions of friendly forces. In addition, it is frequently out of service due to maintenance needs and sometimes is incompatible with the warfighting systems of allied forces. As a result, the joint force is gradually losing its edge in electronic warfare.

The Navy is leading a joint effort to develop a Next Generation Jammer that will remedy these deficiencies by providing greater power, agility, precision and reliability. The new jammer will be able to cover a wider range of threats and operate seamlessly with allied forces, while providing growth capacity for coping with new threats that emerge in the years ahead. Development of the Next Generation Jammer must be kept on track for initial operating capability in 2018 if the joint force is to continue providing adequate electronic protection to U.S. warfighters.