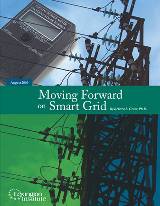 New information technologies make it possible to put in place a “smart grid” capable of two-way communication and many more functions to control supply and demand.

A smart grid can help prevent black-outs, give consumers up-to-the-minute information on electricity usage and prepare the way for increased use of clean, renewable energy from sources such as wind and solar power. “Even as our economy has been transformed by new forms of technology, our electric grid looks largely the same as it did half a century ago,” said President Barack Obama during a March 19, 2009 visit to an electric car factory in Orange County, California.

Today’s power grid in America is a relic of the 20th Century. The idea behind smart grid is to inject a two-way information layer into the electricity distribution process. Smart grid components include advanced home meters, new grid management techniques and software. At the home or business, smart grid can aid conservation by showing customers their power usage and offering real-time choices about when they use electricity. Scaling up, smart grids allow utility managers to constrain peak load requirements through a combination of consumer incentives and accurate diagnosis of demand. Ultimately, smart grid technologies can open the door for more plug-in electric cars and vehicles. Added together, the impact of smart grid may help craft an environmentally-sustainable way of the life for the 21st Century.

Smart grid technology is proven, but the systems process of applying it is still maturing. Local smart grids implemented in cities and regions can create a wider, national grid responsive to renewable energy sources like solar and wind power. They can also maximize other sources of power from traditional fossil fuels and nuclear power. Experts call for the smart grid to take the best features of the Internet, such as open standards and easy upgrades. The smart grid will not just transmit power. It will distribute it from many sources and allow expanded supply and demand from the grid.

Smart electric grid experiments are under way in several states and cities. Local groups are employing a range of options from state-level legislation to public-private partnerships to test smart grid systems and expand their application.

The power of national policy and commercial ingenuity extended electricity to rural America. It can smooth the way for smart grid, too.