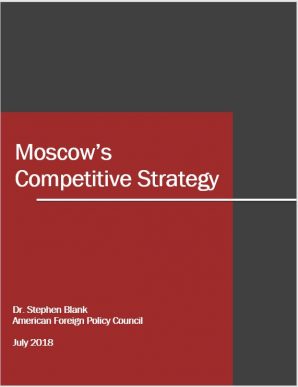 Click here to read the full report as a .pdf

Since at least 2005, Russia’s leadership has believed itself to be at war with the West. This war is not primarily one of kinetic combat though recent moves suggest that Moscow believes such a war is increasingly conceivable. Rather it should be described as a new form of political warfare that derives in many from Soviet precedents.

Political warfare is a whole of government strategy where military forces play a vital but not necessarily primary role in the strategic rivalry with Washington. Their purpose is first to intimidate and then to deter the West, acquire a usable military superiority over neighbors and on Russia’s frontiers, and sustain the regime and its view of Russia as a great power that is under perpetual siege from abroad.

The strategy then is one of “cross-domain coercion” as coined by Dmitry Adamsky and it ranges globally. Even as Moscow builds up its conventional and nuclear weapons (despite economic constraints that have even forced reductions in defense outlays) from the Arctic to the Levant, it conducts an unrelenting asymmetric information and cyber warfare that targets key socio-political, infrastructural institutions and grids, uses energy, organized crime, media and intelligence subversion and subsidization of foreign politicians, movements and parties for its aims.

Since 2016, the West has begun to come to terms with this “phalanx” of forces but it is clear that much more has to be done for Russia enjoys conventional superiority in Europe along its frontiers, is conducting an unopposed information warfare and the non-kinetic domains of its strategy are operating uninterruptedly.

However, we cannot simply dismiss the military aspect given Russia’s problems and NATO’s superiority on paper. Even if Moscow prefers not to wage an actual war against the West, it continues military operations in Ukraine and Syria while threatening NATO members from the Arctic to the Mediterranean and by regularly making nuclear and conventional probes and overt threats. Recent trends show that the Russian government is deliberately fostering a domestic mobilization program and war psychosis against the West.

Therefore, it is essential that we grasp Moscow’s strategy and formulate an appropriately competitive one to negate its strengths and induce it to make strategic decisions that reduce its ability to mount successful challenges to the U.S. Apart from the incessant information and political warfare campaign, Moscow’s nuclear buildup, which now includes both countervalue and counterforce weapons, aims not to escalate to deescalate in wartime but rather at a much broader concept.

This concept is escalation control, namely the ability to control all the phases and potentials for escalation throughout any crisis from start to finish. In achieving this outcome Moscow will both intimidate and deter NATO into accepting Russian faits accomplis, e.g. Crimea or Syria. In this way Moscow can exercise untrammeled sway over the former Soviet space and convince itself, its subjects, and the rest of the world that Russia is truly the great power it conceives itself to be.

In that case the U.S. and its allies will then have to treat it as an equal, essentially allowing it veto over U.S. and NATO military actions, and acknowledging it as having an unquestioned sphere of influence in Eastern Europe, i.e. not only the former Soviet Union but even the Warsaw Pact territories. At the geopolitical level this is a strategy of inciting and exploiting every conceivable source of division in world politics, engendering an arms race that Russia thinks had already begun against it, and extending its claim to strategic real estate from the Arctic to the Mediterranean and global influence beyond those parameters.

This strategy also dictates the necessity of not just friendship with China but arguably of an alliance to force the West into accepting Russia’s self-valuation and claims. This is not a formal alliance like NATO but the two powers share common frameworks of self-representation, a common animus towards U.S. values and power, and a desire to rewrite the rules and territorial parameters of the current international order to reflect more accurately what they believe is their rising and our declining power.

Russia, in response to its transformed strategic environment, capabilities, and understanding of contemporary war, has long since formulated and begun to execute a strategy that challenges the U.S. across multiple domains and territories from the Arctic even to South America, e.g. its position in Cuba, Venezuela, and Nicaragua.

At the same time, Russia is also cementing a multi-dimensional alliance with China and threatening an offensive military and nuclear strategy. The persistence of this strategy and its refinement over a decade of policy requires that we too recognize that we are under attack and will be for some time to come. Therefore the West must formulate and execute our own equally competitive strategy.

We are confronted by a Russian adversary not only in possession of new weapons but also with new tactics and innovative thinking about contemporary warfare. Therefore we must also disenthrall ourselves and think anew about that subject. This requires more than new, advanced weapons as promised by the third offset strategy.

Europe is under attack whether it accepts it or not. And Putin’s Russia is an implacable foe, i.e. one that cannot be placated, for it will regard dialogue as surrender and proof of its allegations concerning the West’s lack of moral fiber. Moreover, war is inherent in Putin’s project as is empire. And if we are at war a strategic response is necessary that utilizes all the instruments of power and deploys them wisely

Therefore business as usual, as many recommend, is not an adequate reaction to our unexpected situation. Strategy, operations, force structures, tactics, and not least operational and strategic concepts as well as intelligence must be upgraded and adapted to contemporary requirements. That also means repairing broken national security policy structure so that we can bring to bear the full weight of state capacity upon our strategic challenges. All this must be a dynamic process with constant readjustment given the dynamic nature of our time. This is a heady task for any government but we all understand that today the world has no good alternative to American leadership.