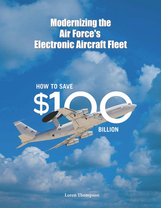 The U.S. Air Force operates a fleet of six dozen intelligence, surveillance and reconnaissance (ISR) aircraft based on the old Boeing 707 airframe that are essential to the success of the joint force. Some of the planes are equipped with radars for tracking moving air and ground targets. Others monitor the sensitive electronic signals of adversaries. Still others detect nuclear detonations and arms-control violations.

The cost of sustaining the aging ISR fleet is very high. The four-engine aircraft are not fuel-efficient, and suffer from various age-related problems such as metal fatigue and corrosion. Replacement parts are expensive to obtain, and up to a third of the planes are unavailable on any given day awaiting repairs. Estimates as to how much longer the planes can be safely operated are unreliable, because no one has ever operated jets for as long as some ISR planes have been in service.

The Air Force needs a replacement plan for its ISR fleet that fits within projected budgets. The only affordable solution is to modify commercial transports for military roles, and the leading candidate is the twin-engine Boeing 737 narrow-body airliner. The 737 is the most widely used jetliner in the world — 10,000 have been ordered — and has already been modified by the U.S. Navy and foreign governments to carry out the kinds of missions that the ISR fleet currently performs.

The Air Force could save $100 billion over the next three decades by replacing its current ISR fleet with military versions of the 737. Development costs would be relatively low because so much of the engineering has already been done. Production costs would be contained by combining commercial and military assembly in the same facilities, using the same supply chain. Sustainment costs will plummet as aging four-engine planes are replaced with modern twin-engine transports and the Air Force is able to utilize the 737’s global maintenance network.

This is the only replacement plan that is affordable within projected budgets. Whatever the virtues of other approaches to modernization may be, they will not be funded in the timeframe necessary to minimize the risk of losing airborne intelligence, surveillance and reconnaissance vital to the joint force. This report was written by Loren Thompson of the Lexington Institute staff as part of the institute’s continuing inquiry into the requirements for preserving U.S. military and economic supremacy.