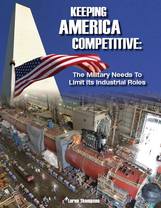 During the Cold War, the U.S. military acquired a vast network of public-sector industrial facilities and private-sector suppliers. Over time, a division of labor emerged between the two segments of the defense industrial base: private companies would develop and manufacture combat systems, while public facilities would maintain and repair them. Although this arrangement required the government to fund two parallel industrial systems, it worked reasonably well as long as the U.S. economy generated the wealth necessary to support a vast “military-industrial complex.”

However, in recent years the U.S. economy has begun to falter and the federal government’s debt has risen rapidly. That has led to a widespread belief that the government needs to reassess how its activities impact economic performance. One facet of the debate is the relationship between military spending and the nation’s industrial base. While it is indisputable that Pentagon research has led to important technological breakthroughs such as computers, jet engines, lasers and the Internet, other facets of the military enterprise may be impeding economic competitiveness and progress.

A case in point is the industrial functions performed by federal facilities such as depots and shipyards. These facilities, which typically employ thousands of workers, often provide services that could be obtained from private companies. In the process, they drive up the government’s fixed costs, contributing to budget deficits. They also fracture the product life-cycle of combat systems by requiring transfer of the systems from the private sector to the public sector, largely severing the relationship between developers and maintainers. In addition, they undercut the potential for economies of scale that have long been recognized as crucial to maximizing efficiency. Beyond that, they reduce the trade competitiveness of some of the nation’s biggest exporters while slowing the pace of innovation in the industrial segment of the economy.

This report explains why performance of industrial activities in military depots and shipyards can be detrimental to the nation’s broader economic goals. It acknowledges the contributions of public-sector facilities, but argues that the range of industrial functions they accomplish should be limited to assure they do not impede the potential of the larger economy. The report was written by Dr. Loren Thompson of the Lexington Institute staff as part of the institute’s continuing inquiry into the relationship between U.S. economic and security policies.