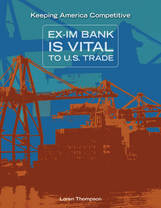 For nearly eighty years, the U.S. Export-Import Bank has been the lender of last resort for U.S. companies seeking to sell their goods abroad. Ex-Im Bank, as it is called, provides loans, loan guarantees, insurance and other forms of credit when recipients of assistance are good credit risks but the private sector either cannot or will not provide financing. The bank’s role tends to expand when credit conditions are tight, as in the recent recession.

As the official export credit agency of the federal government, Ex-Im Bank also acts to level the playing field for U.S. exporters when other governments seek to influence the decisions of foreign buyers by extending credit on concessionary terms. In recent years, China has been especially active in displacing U.S. companies from foreign markets through predatory export financing, and Ex-Im Bank plays an important role in countering such market-distorting behavior.

Ex-Im Bank does not require taxpayer funds to operate. It covers the cost of its operations by imposing fees on users of its services. The value of those fees typically exceeds the cost of operations, so each year the bank turns over hundreds of millions of dollars to the U.S. Treasury that help pay down the national debt. Although the government is potentially liable for Ex-Im loans that are not repaid on time, the default rate on Ex-Im credit arrangements is below that of most commercial banks so federal exposure is minimal.

In 2011, Ex-Im Bank financed over $40 billion in U.S. exports, helping to sustain 300,000 jobs mainly in the U.S. manufacturing sector. About 80 percent of the dollar value of Ex-Im financing is received by big exporters such as Boeing and General Electric, but about 80 percent of the bank’s transactions support the exports of small and medium-size companies. Smaller companies also benefit indirectly from credit extended to big exporters when they are suppliers to those companies.

The Ex-Im Bank’s charter must be renewed in the near future if it is to continue operations, and it is fast approaching the $100 billion statutory limit on how much credit it can provide. It is vital to U.S. exporters that the bank’s services continue to be available if they are to compete with the companies of other countries in markets where weak economic or political conditions deter private-sector sources from providing financing. Renewing Ex-Im Bank’s charter with increased lending authority is the only practical way of countering the predatory financing practices of other trading nations, many of whom devote a much larger share of their national wealth to assisting exporters than America does.