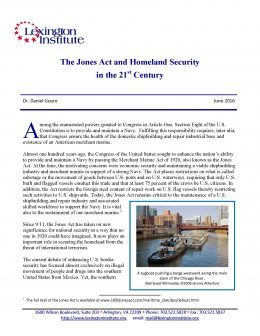 For nearly a century, the Jones Act has protected the U.S. shipbuilding industrial base and ensured the continuation of an American merchant marine.  Since September 11, it has also become an important instrument for the protection of the U.S. homeland from the threat of foreign terrorism. The Jones Act requires that all ships engaged in cabotage, movement between two U.S. ports, at sea or via inland waterways, be U.S. flagged and that the crews be no less than 70 percent U.S. citizens. This limits the ability of terrorists to use U.S. waterways to attack the homeland, improves the collection of intelligence and reduces the burden on the domestic security forces. Were there no Jones Act, one would have to be created.