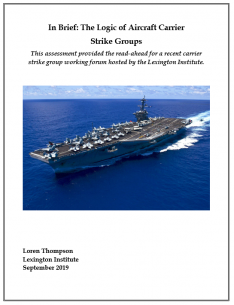 This assessment provided the read-ahead for a recent carrier strike group working forum hosted by the Lexington Institute.

The United States is the only nation in history that has sustained a fleet of large-deck, nuclear-powered aircraft carriers. “Large-deck” means the carrier has over four acres of deck space, enough to support a carrier air wing of 75 or more aircraft. “Nuclear-powered” means the carrier has unlimited range and endurance, requiring refueling only once during its 50-year service life.

Current law requires a fleet of at least 11 such carriers, enough to support forward deployment of three to four carriers in the seas around Eurasia at any given time, and more during crises. Carriers typically operate in “strike groups” of several warships, with the carrier providing most of the offensive punch while surface combatants and submarines provide defense against overhead, surface and undersea threats.

Large-deck carriers of the Nimitz and Ford class can sustain more than a hundred aircraft sorties per day, surging to over twice that number in wartime. With each strike aircraft capable of accurately delivering multiple smart bombs per flight, a carrier air wing can disable or destroy hundreds of targets in a single day.