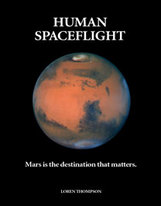 NASA’s human spaceflight program has been gradually losing ground since the Challenger disaster 25 years ago. Retirement of the Space Shuttle fleet and cancellation of the Bush Administration’s Constellation program signal an uncertain future for one of the most important scientific initiatives in human history. Although Congress and the Obama Administration have cobbled together a framework for proceeding with future missions, human spaceflight today lacks a core mission or rationale that can sustain political support during a period of severe fiscal stress.

Mars is the sole destination for the human spaceflight program that can generate sufficient scientific benefits to justify the scale of expenditures required. It is also the only destination likely to sustain political support across multiple presidential administrations. Mars is the most Earth-like place in the known universe beyond our own planet, and it is the one location that could conceivably support a self-sustaining human colony. It has water, seasons, atmosphere and other features that may hold important lessons for the future of the Earth, but unlocking those lessons would require a sustained human presence on the Red Planet’s surface.

NASA does not presently possess the technology needed to mount a manned mission to Mars, but with careful preparation a mission to the Red Planet would be feasible in about 20 years without significantly exceeding the space agency’s currently planned budgets. The key to making such a plan work is to designate Mars as the ultimate destination and then arrange “stepping stone” missions to intermediate destinations such as near-Earth asteroids so that technologies can gradually be scaled up to the level required for a Mars mission.

The two most important elements in any human spaceflight program that proposes to go beyond low-Earth orbit are an evolvable heavy-lift launch vehicle and a multi-purpose crew vehicle. Congress has directed that NASA’s future work on both systems should focus to the maximum degree possible on technologies already under development for the Constellation program. By applying those technologies to a human spaceflight agenda focused on the ultimate destination of Mars, NASA can preserve its investment in a highly skilled space workforce and related infrastructure. Failure to make Mars the centerpiece of future exploration efforts will probably doom the human spaceflight program to a further erosion of political support at a time when its survival is already in question.

Click here to view the full study as pdf.