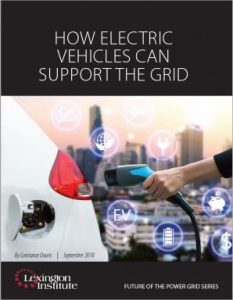 Click here to read the full report as a pdf.

Many people recognize that electric vehicles benefit the environment, but fewer realize the electric grid can operate more efficiently with these cars. They are cheaper to maintain and operate than traditional cars and can flexibly respond to grid demand by charging during off-peak times. With their storage capability, electric cars can also incorporate more renewable energy sources, provide backup power during outages and export electricity to the grid.

Worldwide automakers are spending billions to create new electric vehicle models. Even oil companies such as Shell, BP and Total are investing in charging stations to benefit from this new market. However, automakers are ahead of the customer when it comes to electric vehicles because their advantages need to be better communicated to increase adoption.

States such as California and New York are adopting more distributed energy resources, including solar photovoltaic, energy storage and wind turbines, and the electric grid is becoming more decentralized as a result. These assets enable new models of energy generation and retail, including peer-to-peer electricity trading to buy and sell electricity to neighbors and friends. Thus, the grid is becoming a mix of centralized and decentralized power generation.

Utilities’ business models are being challenged by distributed resources along with the declining cost of electricity, energy efficiency programs and changes to the economy. However, electric vehicles represent a new energy demand that could help some utilities partially make up for selling less power and keep customer rates low. Furthermore, utilities could invest in charging infrastructure to accelerate electric vehicle adoption. More of these cars on the grid would stabilize rates for all customers as the power system modernizes with smart technologies.

Assessing the impact of electric vehicles on the grid is complex and highly dependent on many variables, including where a car is located on the grid and the time of day it is charged. If too many electric vehicle owners charged simultaneously, large spikes in electricity demand could cause stress and strain on the grid, potentially affecting its stability, efficiency and operating costs. There is no need for concern because utilities have plenty of time to plan and prepare for these cars since they only represent a small portion of the market today.

For electric vehicles to be widely adopted, there must be equitable access to charging stations because not everyone has a private garage or stable access to electricity. Fast chargers that are publicly accessible could allow drivers to add about 50 to 60 miles of charge in about 30 minutes and workplace and wireless charging may be more convenient for drivers.

Worldwide efforts are being made to increase electric vehicle adoption. China currently has the highest number of electric cars on the road, surpassing the United States. However, it is critical for drivers to have backup power available to charge their electric vehicles in the event of an outage. The aftermath of Hurricane Maria in Puerto Rico demonstrates the devastating consequences that may result when electricity is unavailable for an extended period of time.