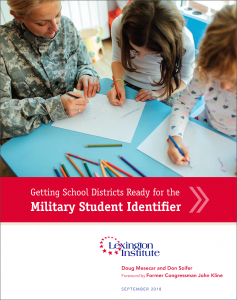 Those who serve active duty in our nation’s military are often quite familiar with making sacrifices as part of fulfilling their service. So, too, are their families, and even their school-aged children, for whom the common realities of life in the military present frequent challenges to succeeding academically, and even non-academically, in school.

The Every Student Succeeds Act (ESSA) is now starting to impact state and local educational systems across the country as they assess students, collect data, make accountability determinations, and work to provide a more equitable and successful educational experience for all students. While the law impacts all students in one way or another, it has a particular relevance for military-connected students.

ESSA requires all states to collect — and report — assessment data on military-connected students, defined to include students with a parent who is a member of the Army, Navy, Air Force, Marine Corps, and Coast Guard on active duty, including full-time National Guard duty.

Gauging the performance of the nation’s 1.2 million military-connected children is vital because they move many times during their K-12 years, far more than typical American children. As a result, they are at much greater risk for uneven and inconsistent education.

Until now, there has been very little reliable, consistent data about most stateside military-connected students. This lack of information translates to a lack of awareness about their academic progress, and military-connected students’ unique contributions and challenges all too often go unnoticed in schools. But now, practitioners, families, policymakers, and researchers, can better understand how and why the schools these students attend are succeeding — or are the best fit for a student’s needs.

As many as 20 states had some form of a military student identifier (MSI) in place before ESSA, but there was a wide variety of definitions of which students to include and how to share that information. Generally, the data was not even made public. Virginia, for example, has been a leader in creating a military student identifier, but did not publicly report the information so all stakeholders could benefit from the information.

For far too long, little data has been available about military-connected students and their educational experiences and outcomes, or their transition pathways. Under ESSA, this is about to change, and change for the better.

By assessing several school districts that serve substantial military populations, and conducting a thorough review of publicly available information, this report aims to provide local education officials nationwide with a number of recommended practices and additional steps that they should consider taking to successfully implement the ESSA military student identifier and effectively use the information collected. The report also can serve as an important guide for military service parents as their children transition to school districts around the country.