The abysmal decline in mail service at the U.S. Postal Service (USPS) has created significant hardships for millions of Americans. And the situation could get even worse: as of January 15, USPS is no longer under court order to report its weekly mail performance, that is the percent of mail delivered on time.

USPS should announce a plan no later than March 1 to restore mail service to at least its June 2020 performance levels. Whether compelled by court order or not, it should make public its on-time delivery rate for mail and packages on a weekly basis.

In the interim, the U.S. House of Representatives Oversight and Reform Committee should prominently post this information to its website. The Committee took this action after the USPS had poor mail performance in July and it was followed with a temporary service rebound.

Mail service is worse than it has been in decades. The ramifications include delayed and lost checks and late charges for credit card and other bills that are not received on time. On the personal front, heart-felt sympathy cards with personal notes have been delayed in reaching those in great need. Coupons and other special offers arrive after sales are over, or for a shortened period during a sale.

For many folks age 50 and older this is the tipping point. They have decided to stop using USPS for bill paying and items, saving postage costs, and accelerating a trend away from mail.

For the week ending December 26, 2020, the last for which information is publicly available from court filings, USPS delivered just 64 percent of first-class mail within its service target delivery times. Throughout the fourth quarter, both before and after the November 4 election, first-class mail delivery never came close to the 96 percent on-time service standard.

The chart below shows the percent of mail delivered on time each week in the fourth quarter. The dates represent the end of the week measured. 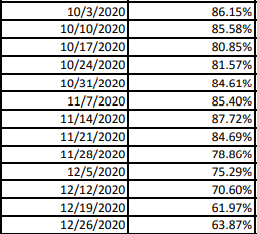 This publicly available information was obtained by Save the Post Office from public court filings in Jones v. USPS. This is one of several lawsuits to make sure USPS provided timely delivery of ballots in the General Election and the January 5 Georgia Senate elections.

There are three factors that explain the general slowdown in mail.

COVID has had an impact. However, for the quarter ending June 30, 2020, a full quarter with COVID, USPS delivered 91 percent of first-class mail on time. COVID has also led to significant declines in mail volume, especially marketing mail. Fiscal year 2020 mail volume declined 11 percent at USPS.

The November election also presented operational challenges to USPS and it met these admirably – delivering nearly all election mail on time. Yet, the disruptions in the quarter, as seen above, were much greater after the November 3 election.

This raises troubling questions as under Title 39 of the U.S. Code USPS is supposed to prioritize mail delivery over packages as it is the only entity in America that can provide this monopoly service. Many items mailed are essential to U.S. commerce.

Furthermore, many business mailers are growing incensed with poor service and a sense that they are being treated as second-class customers compared to those who send packages.

USPS can fix this. Congress can help by again stepping in, demanding mail and package performance information, and sharing it with the American people, those whom USPS serves.

About the Author: Paul Steidler is a Senior Fellow with the Lexington Institute, a public policy think tank based in Arlington, Virginia.