Want to see a scary, scary chart on America’s fighters? Well, get ready for a dizzy drop that will remind you of a black diamond ski run or one of those rogue waves on the Alaska fishing shows.

Here are the Pentagon’s purchases of fighters from 1975 to today and projected out to 2025. Note the huge drop over the last 15 years. Part of that was intentional, as the Air Force waited for stealth and all services replaced older aircraft with newer, more capable models like the Navy’s F/A-18EF. Now the Air Force and Navy are facing huge shortfalls with only the F-35 in line to make up the difference. “I’d buy F-35C today if it were ready,” a Navy admiral said recently. 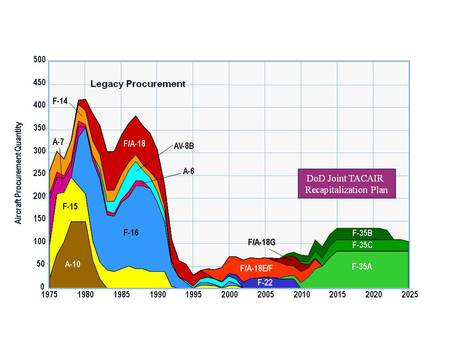 No one needs F-35 more than the Air Force which will face F-16s falling out of the sky in a few years. 42 Hornets, or 20 F-22s, or 15 C-17s is not high-rate production. Early on, the F-35 program planned for the first four production lots to yield 177 aircraft. Now the plan is for 63 aircraft. Any more slowdowns like that will create yawning gaps in fighter inventories. Fortunately Secretary of Defense Robert Gates is fully behind the F-35, because production needs to ramp up, and fast.