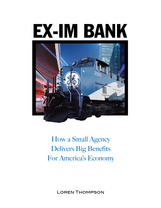 The Export-Import Bank is the official export credit agency of the U.S. government, established during the Great Depression to create jobs by facilitating the export of American-made goods. The bank provides loans, loan guarantees and insurance to exporters and their overseas customers when private-sector lenders are either unable or unwilling to provide financing. Most of the exports financed through Ex-Im programs go to developing countries in Africa, Asia and Latin America.

Congress has reauthorized Ex-Im operations two dozen times since the agency’s inception, and gradually imposed a series of limits on how it functions. Among other things, the bank cannot compete with private-sector sources of financing, must levy fees on users of its services to cover the cost of operations, and must make at least 20% of its credit available to small businesses. As a result of these requirements, most of the bank’s transactions are with small companies, and it typically generates a surplus of revenues that is turned over to the Treasury.

Exports play a major role in U.S. economic growth and job creation. Ex-Im credit programs reduce the unique risks of exporting and ease the challenge of securing financing when commercial credit is hard to obtain. Market sources of financing are especially difficult to find if potential buyers of U.S. goods are in developing nations, if the scale and duration of financing needs is great, or if economic downturns have led to a tightening of credit. Ex-Im activities surged during the recent global recession, when commercial banks became less willing to lend.

In addition to facilitating exports and job creation, Ex-Im also plays an important role in “leveling the playing field” for U.S. exporters when they face predatory trade practices by state-owned or state influenced companies in other countries. Although many of the biggest industrialized nations are party to agreements that limit the kind of support export credit agencies can provide, some countries such as China routinely pursue unfair practices that put U.S. exporters at a disadvantage. Ex-Im Bank counters these practices to assure market forces are not subverted.

Most U.S. companies finance their exports from market sources. Ex-Im only finances about 2% of U.S. exports. However, Ex-Im efforts are heavily concentrated in key industries such as aerospace and energy where they have a disproportionate impact on U.S. competitiveness. Ex-Im estimates that its financing sustains over 200,000 jobs in the U.S., many at small and medium-size companies. Even when Ex-Im financing supports the exports of big companies like Boeing and Caterpillar, much of the money passes through to small suppliers and subcontractors.

Ex-Im does not have many critics, but among those who question its operations the arguments used are often uninformed or misleading. For instance, Ex-Im does not provide subsidies, does not use taxpayer funds, does not distort market forces, does not expose the government to major credit risk, and does not put U.S. companies at a disadvantage by making financing available to foreign competitors. A careful examination of Ex-Im programs reveals that the bank provides much the same services as export credit agencies in 60 other nations, utilizing no federal funds while maintaining a very low default rate on loans. By any reasonable standard, it is one of the government’s most efficient, effective agencies.