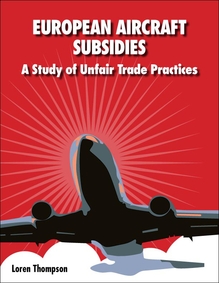 The United States historically has been the dominant supplier of commercial transports — airliners — to the global market. As recently as 20 years ago, Boeing and other U.S. companies controlled 85% of the market. But in 1970, a group of European governments established a subsidized competitor to the U.S. industry called Airbus with the goal of claiming a sizable share of global sales. The plan was successful: two of the three U.S. producers exited the market, and the sole survivor, Boeing, no longer claims a majority of new orders or deliveries. Airbus has thus become the dominant player in the global market.

The biggest single factor explaining the rise of Airbus was a type of subsidy called launch aid — low-cost or no-cost loans that enabled the European company to develop a family of airliners much faster than any purely commercial company could have, while also pricing its planes aggressively. Without government launch aid, none of the planes Airbus offers in the market today would ever have been built. The practice of providing billions of dollars in subsidies to each new Airbus model has distorted market forces, putting Boeing at a severe disadvantage in the marketplace. As a result, the United States has lost hundreds of billions of dollars in export earnings since Airbus was established, along with tens of thousands of jobs in the aerospace sector.

In 2009, the World Trade Organization decided that the launch aid provided to Airbus is largely prohibited under prevailing trade rules, and found that a range of other government subsidies the European company receives are at least “actionable” in the sense that they caused damage to Boeing and the United States. European governments have brought their own case to the WTO alleging that Boeing received unfair subsidies, but that case does not contend the U.S. company received launch aid. In fact, both companies have received other types of aid over the years, but some of that aid is permissible under trade rules and none of it has the impact of launch aid.

If the United States fails to put an end to the European practice of subsidizing Airbus planes, it will continue to lose market share in the commercial transport business, just as it has in steel, electronics and other sectors where it was once a dominant global player. With the United States currently running a trade deficit of over a billion dollars per day in manufactured goods, European aircraft subsidies have become a test case for the future of free trade and America’s global competitiveness. The issue is likely to influence how the U.S. military goes about buying a future aerial refueling tanker, since one of the planes that has been offered is based upon the heavily subsidized Airbus A330.