According to the U.S. Department of Energy, “Our century-old power grid is the largest interconnected machine on Earth, so massively complex and inextricably linked to human involvement and endeavor that it has alternately (and appropriately) been called an ecosystem.” The grid today utilizes over 360,000 miles of transmission lines, including approximately 180,000 miles of high-voltage lines, connecting to over 6,000 power plants.

This system has been an important economic driver for more than 100 years, although over just the past decade and, in very visible fashion, Americans of nearly all ages, backgrounds and income levels have borne witness to an amazing increase in electricity consumption at the individual user level. This increase is primarily driven by high standards of living and disposable income that afford widespread use of multiple personal electric devices such as laptop computers, cell phones, and internet modems, each of which is nearly always on and/or constantly recharging. There are also several million fully electric on- and off-road vehicles that are served by the same electrical power grid, with the number increasing every day.

And yet even though we have such tremendous reliance on our persistent access to widely available and relatively affordable electrical power, all too few of us understand how the power generation, transmission, and delivery systems work and – crucially – how severe the consequences would be if the grid were to fail us for any prolonged period.

Those consequences – which could include food and fuel shortages, massive transportation and telecommunications disruptions, and a lack of access to bank machines or use of credit cards – could radically affect individuals, businesses, and governments over a prolonged period. Understanding how the system works is the first step in determining if, how and to what degree to address significant risks. It is worth examining how our national power grid actually works today.

The Essential Role of the North American Electrical Power Grid

The role of the electrical grid in our economy is so significant that it was named as the “greatest engineering achievement of the last century” by The National Academy of Engineering. Indeed, without the electrical grid much of the amazing industrialization and economic progress of the past century would not have been possible.

This central role as a truly modern miracle and essential piece of the economy is evident because the electrical grid serves as the physical connection between the supply of broader global energy resources and the energy demands of end-users of electricity here in the U.S., whether those users are individuals, businesses, or Federal, state and local governments.

At the same time, the grid is an essential element of the interdependent transportation, communication, water and other necessary services infrastructures upon which so much of our economy relies because it serves as the primary and preferred power supply for such critical elements as fuel pumps, traffic signals, the air traffic control system, and radio and cell phone towers.

Beyond routine operations, however, in practical terms electricity plays an even more fundamental role in preserving the life and safety of all Americans. Indeed, the role of electricity in sustaining normal daily operations during crises can hardly be overstated, reaching across all the necessities of modern life (e.g., enabling transportation, 24-hour business operations, running hospital equipment, and powering First Responder dispatch systems) as well as numerous conveniences (e.g., air conditioning, cellular telephone networks, and refrigeration for food).

Without our ‘always-on’ power grid we would have to rely upon smaller and less reliable systems or significantly less efficient and less widespread micro-generation.

This truth is all the more relevant during prolonged disruptions and any period when weather or other additional challenges are also a factor in sustaining life, such as extreme high or low temperatures. As a result, the energy sector as a whole – and electrical power in particular – represents a highly interdependent and very valuable and critical segment of our overall economy.

Power plants produce electricity from the conversion of primary energy sources such as coal, water, natural gas, oil, and nuclear power into electricity that is then distributed via a system of transformers, high voltage transmission lines, and distribution lines. 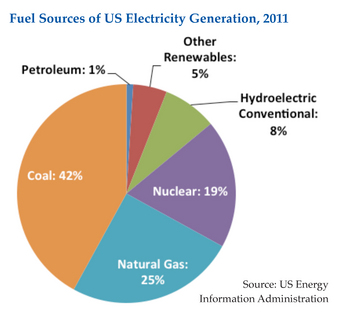 1. Inputs: In order for coal to be used by power plants to create electricity it first must be mined and transported to the power plants, often via rail car. Hydroelectric sources are often controlled through dams that regulate the flow of water into the plant, but as with coal, oil and natural gas supply chains involve production (i.e., extraction), shipped via tanker or pipeline to a refinery, and then transported by truck, ship or pipeline to the power plant. The material for nuclear plants must also be mined, processed and transported. The linkages across sectors are thus apparent from the very beginning of the electricity production process.

2. Generation: Power is generated by approximately 5,800 major power plants and numerous other smaller generation facilities across the country.

3. Transmission: As power is generated it cannot be stored, the grid lacks the capability to store it. Rather it must be immediately transmitted to local substations along a network of high voltage wires connecting the site of generation to the population centers that need the power. The U.S. has a fragmented distribution network, however, because within the mainland U.S. three sectors comprise the so-called “national grid” described below.

4. Distribution to End Users: The end users of electricity include practically all public and private sector entities, including emergency services, government facilities, private sector manufacturing and other businesses, and the general public. While some high volume electricity users have specialized substations on their own premises, generally the retail electrical system relies on local/regional power companies that connect to the national grids described above via substations and then deliver electricity the final few miles to the end users.

While the power generation and delivery process described above seems reasonably straightforward, in practice many economic, geographic and historical practicalities complicate the interoperability of our “national power grid”, as manifested in the fact that the U.S. and Canada are served not by a single grid as much as by four inter-locking regional grids, the Eastern, Western, Texas, and Quebec systems, as depicted below: 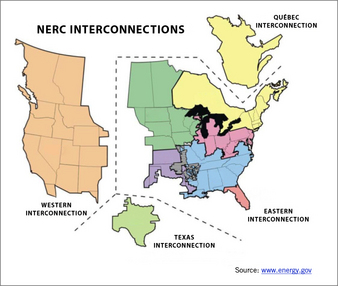 Significantly, while these regional grids are technically connected to a small degree they are not in fact integrated in terms of the ability to share large amounts of power. As a result, in the event of a prolonged disruption to any of the single discrete segments of the North American power grid today it would be both very desirable and essentially technically impossible to have the remaining grids share their power across and into the affected grid.

There are some pilot projects looking to test the feasibility of making these systems more interoperable, the capability is not there at this time.

While this does have the potential benefit of limiting any cascading failure from taking out the entire nation’s power supply, that will be of little comfort to any of the tens of millions of individuals and businesses that may be affected for weeks or months until the problems in any given affected regional grid are remedied.

According to the American Society of Civil Engineers, “If future investment needs are not addressed to replace and upgrade our nation’s electric generation, transmission and distribution systems, then costs will be borne by both households and businesses. These costs may occur in the form of higher costs for electric power, or costs incurred because of power unreliability, or costs associated with adopting more expensive industrial processes”. These shared costs require concerted preventive and mitigation efforts.

As a result of all these costs – and the growing risk profile when the above hazards are considered in isolation and collectively – it is clear the modernization of our infrastructure and shift towards a “smart grid” to increase our awareness of what is happening and why is well deserving of our attention and interest. Marshaling the willpower to positively impact the system will require a national conversation and should be focused on using the principles of systemic resilience to ensure the continuing operation of the system regardless of the nature of the threat or hazard.

This approach of focusing on resilience includes investments in basic solutions such as interchangeable parts for major capital equipment as well as new technologies to during disruptions and increased real-time awareness of what is happening in and through the power grid with increased use of “smart” devices and better tracking of energy demand, delivery and usage patterns.

Despite the significant and growing risks described above there does not seem to be sufficient political awareness to support the kinds of broad-based infrastructure investments that would genuinely secure and protect our ability to ensure continued easy access to electrical power for the coming decades. This includes multibillion dollar investments in everything from refreshed generation capacity and new power plants to redundant distribution networks using new, modular parts to smart meters that can identify and help isolate disruptions and anomalies. Responsibility for paying for these investments, between energy consumers and taxpayers, must be established.

While estimates of the costs to develop these solutions range from several hundred billion to $1.4 trillion over a decade, this cost is put into perspective when considering the estimated $119 billion of productivity losses each year due to power disruptions and outages – losses that may be rising significantly as the severity of each incident and the likelihood of those incidents both increase. Regardless, the discussion is because while the impacts are wide spread they are also cumulatively significant. Infrastructure development and other long- lead changes will take years or decades to implement, meaning if we are to address them the public discourse that could lead to such improvements needs to start, and start soon.