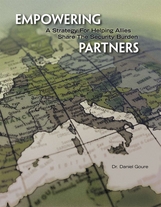 Today, the United States has the opportunity to create a new, more flexible, collaborative approach to the organization, management and support of friends and allies. The Obama Administration has put forth the idea of building partnership capacity in order to enable other countries to do more for themselves and rely less on the United States. This concept is evident in the 2010 Quadrennial Defense Review which articulates a policy of “building partnership capacity.” Likewise, the newly-released National Security Strategy states that to improve its own security, the United States work with others to be part of a collaborative effort to improve security for all.

It is time to take the concept of collective efforts on behalf of global security and stability to a new level. If friends and allies are going to take a large role in the management of our common security interests it is important that they have greater capability to provide for their own security and that of the regions in which they live. Correspondingly, the United States could take a lower profile, be more judicious in how it deploys military power in peacetime while still maintaining a forward presence and retaining the capacity to intervene decisively.

The U.S. is in a position to have enormous influence over the future security environments in regions of interest. It can exercise this influence and shape the security environment without having to expend historically high levels of resources or by maintaining large numbers of deployed forces. By seeking to work with friends and allies, the U.S. can create structures and processes that empower those states to maintain more in the way of critical self-defense capabilities. The U.S. can help develop new strategic architectures for regional security that also allow these friends and allies to collaborate more in regional security and improve their ability to operate with U.S. and Coalition forces in the event of conflict.

A key aspect of the new strategic architecture is providing the means whereby regional friends and allies are able to better deal with the potential for regional military imbalances and the possibility for large-scale aggression that, in some cases, could involve weapons of mass destruction. This could mean providing allies with advanced military equipment in such areas as integrated air and missile defenses, long-range ISR, local sea control and air superiority. The U.S. needs to develop a concerted strategy to provide our allies with additional advanced military capabilities to support their efforts to assume greater responsibility for their own security and that of the regions in which they reside.