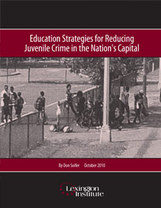 For every five black boys between age 10 and 17 in the District of Columbia last year, three would not graduate high school on time. One was officially truant from school. And one was arrested as a juvenile.

While strong links between juvenile crime and classroom success exist, the District’s education, juvenile justice and foster care networks not only don’t coordinate strategically to solve them, but instead often function as silos working against each other.

Juvenile crime in the Nation’s Capital today bears scant resemblance to the dire warnings made by criminologists including John DiIulio during the latter half of the 1990s. Arrest rates for teenagers in the city have not shown significant increases since those predictions were published. Analysis of 2008 and 2009 juvenile arrest records for the District of Columbia showed that while 85 percent of teenagers arrested were black, an even greater share of those they victimized were as well.

Programs such as the Maya Angelou Academy at New Beginnings Youth Center are accomplishing an admirable record working with juveniles detained in custody. But as this report illustrates, the addition of new, high-quality educational opportunities for teenagers involved in the criminal justice and foster care systems would have persevering outcomes observable in both social and economic terms across the city. Policy recommendations include replicating successful charter school models such as the Five Keys Charter School operating within San Francisco’s prison system, or Philadelphia’s Arise Academy, designed to meet the needs of high-school age foster children.