On April 2, the U.S. Postal Service (USPS) quietly announced it had received $8.6 billion for “COVID-19-Related Operating Expenses,” from the U.S. Treasury, that is taxpayers.

How the $8.6 billion amount was determined USPS did not say in its two-sentence announcement. But it owes Congress, which appropriated USPS up to $10 billion in COVID assistance, and the American public an explanation about this and large budgeted amounts in its recently announced 10-year strategic plan.

For the first six-and-a-half months of the pandemic, ended September 30, 2020, USPS said in its Fiscal Year 2020 10-K financial filing, “We incurred over $700 million in operating expenses during 2020 related to additional costs associated with the COVID-19 pandemic.”

It is all but inconceivable that in the following six months USPS’s costs were $7.9 billion, or more than 1,000 percent higher than the $700 million in the earlier six-and-a-half-month period. The $700 million and $7.9 billion add to $8.6 billion.

In fact, as the chart below shows, the Postal Service has performed much better during the pandemic than it has budgeted. The March-September 2020 figures were budgeted before the pandemic. And for the first time in memory, USPS has been profitable for the first five months of its fiscal year, the current fiscal year. 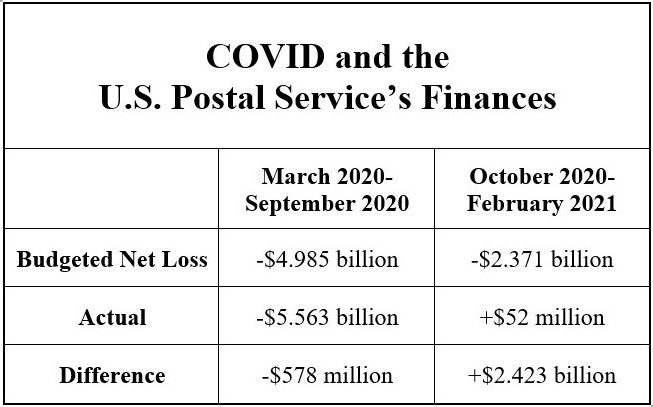 The stakes are quite high for USPS to publicly explain its finances.

On March 23, USPS put forward a comprehensive 10-year strategic plan that aims to eliminate a projected $160 billion in losses over the next decade. It makes tough choices and aims to largely have USPS address its own problems, though it does seek $58 billion in “Legislative and administration actions,” primarily help from Congress in addressing retiree health care liabilities. The plan merits discussion and review.

If the U.S. Postal Service wants Congressional and public support for difficult reforms discussed in its 10-year strategic plan, it should elaborate on the following.

A core provision of the plan is $40 billion in self-funded capital investments. Yet, USPS does not discuss how this figure was arrived at and how much of the investments will go for mail service versus USPS’s competitive package business.

What if, for example, the cost of a first-class stamp rose sharply, say 36 percent, to 75 cents? After recent mail delays and resulting high costs, such as late fees on credit card statements, many Americans would prefer to pay a bit in more in postage – in this case 20 cents more for a stamp — for peace of mind.

If such alternatives were not studied in preparing the 10-year plan, they should be now and the findings disclosed.

Regarding USPS’s pressing need for new vehicles, the report says, addressing Congress, “An additional investment of approximately $8 billion is needed to electrify our delivery vehicle fleet to the maximum extent that is operationally possible.”

USPS should document how this $8 billion figure was arrived at. Furthermore, is USPS OK with setting a clear precedent for Congress getting involved in managing operations? That would seem to open the door to operational chaos.

Like a troubled borrower going to the bank, USPS needs to make exhaustive, thorough, and clear disclosures. And, as the American people, through their representatives in Washington, are the only realistic banking option USPS has, much greater transparency is essential and appropriate.

About the Author: Paul Steidler is a Senior Fellow with the Lexington Institute, a public policy think tank based in Arlington, Virginia.