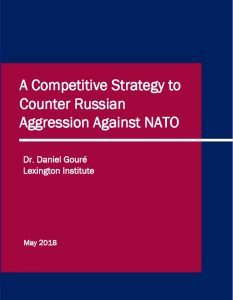 Click here to read the full report as a .pdf

After being dismissed as a phenomenon of an earlier century, great power competition returned. China and Russia began to reassert their influence regionally and globally. . . They are contesting our geopolitical advantages and trying to change the international order in their favor.

Building off the concept of a renewed great power competition, the U.S. National Defense Strategy took a broad view of the necessary actions to ensure national security:

A long-term strategic competition requires the seamless integration of multiple elements of national power—diplomacy, information, economics, finance, intelligence, law enforcement and military. More than any other nation, America can expand the competitive space, seizing the initiative to challenge our competitors where we possess advantages and they lack strength.

What the National Defense Strategy calls for, in essence, is a Competitive Strategy. This is an approach developed by the Pentagon’s Office of Net Assessment in the late 1970s to construct a long-term strategy for managing the military threat posed by the Soviet Union.

This study seeks to support the visions articulated in the National Security Strategy and National Defense Strategy by developing a Competitive Strategy that can be employed to counter Russian aggression against the North Atlantic Treaty Organization (NATO). It identifies areas of comparative Western strength and Russian weakness.

It also identifies policies, mechanisms and investments that the U.S. and NATO should pursue to position strengths against weaknesses, thereby enabling the West to compete more effectively against Russia.

The current competition between the U.S./NATO and Russia is fundamentally different from that of the Cold War decades. So too is the international environment in which it is taking place and the relative power of the competitors. Hence, the U.S. needs a new approach to confront the Russian threat to NATO.

A new strategy for the long-term competition with Russia must address the relative prominence of hybrid operations in Russia’s strategy while simultaneously responding to the marked improvements in its conventional military forces and the evolution of Moscow’s views regarding escalation to nuclear use. The West faces a multi-faceted threat from an adversary militarily weaker than its Soviet ancestor and more vulnerable to economic pressure, but seemingly much more capable of wielding non-military instruments of state power.

Russia today suffers from a range of strategic weaknesses or vulnerabilities that can be addressed in a long-term Competitive Strategy. These include:

It is important to recognize that NATO’s and the U.S’ challenge is not from any particular element of Russian power. Rather, it is to defeat Putin’s strategy to disrupt the current international security system by denying Moscow the ability to disrupt this order at minimum risk and an acceptable price.

It is a mistake to view the current struggle between Russia and the Western allies primarily as a military competition. Certainly, attention must be paid to NATO’s ability to deter Moscow. But if Russia is denied the possibility of a quick, low-cost military campaign, then the competition will be decided on other battlefields. It is in these other domains that the U.S. and its allies have the advantage and are likely to prevail.

The primary competition should be in areas of Western strength and Russian weakness: economics, information operations, rule of law, the global banking system and advanced technology, such as commercial information technology (IT). The U.S. and its allies need to coordinate strategies to deny Russian access to investment resources and commercial technologies for its oil and gas industry.

The U.S. and NATO must compete with Russia in the conventional and nuclear military spheres. It must be made clear to Russia that it will never have a route to a quick and easy conventional victory against NATO, nor a credible option to escalate to the use of nuclear weapons without the certainty of retaliation. NATO needs a well-funded program to counter Russian investments in anti-access/area denial capabilities, particularly its integrated air defense. NATO needs to exploit its advantage in naval forces.

Air and missile defenses are a necessary component of a NATO Competitive Strategy. Russian leadership continues to be concerned with the potential for defenses to complicate its ability to execute high intensity disarming strikes against NATO. The U.S. and its allies need to exploit these concerns by deploying additional air and missile defenses.

Electronic warfare (EW) and cyber need to be priority areas for investment in a Competitive Strategy to counter Russia. EW assets should be directed at negating Russian air defense sensors, intelligence, surveillance and reconnaissance (ISR) assets and communications, command and control systems.

Finally, the U.S and its allies must be willing to engage in a long-term competitive campaign to its technological advantage vis-à-vis Russia. Investments need to be made in areas such as robotics, artificial intelligence and autonomy, hypersonics, directed energy, electronic warfare and cyber.

NATO needs to focus not just on science and technology, but also on related industrial capabilities that will support high quantity production of advanced weapons systems. It is in the latter area that the West has a distinct advantage over Russia.