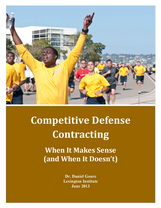 Competition has become the mantra of the Department of Defense’s (DoD) acquisition corps. The Under Secretary of Defense for Acquisition, Technology & Logistics, Mr. Frank Kendall has gone on record saying “I think that nothing, nothing, works better than competition to drive cost down.” DoD has established metrics for competition, sort of like a quota system. Many more prime contracts are being competed. The idea is to the greatest extent possible to replicate the commercial marketplace.

The defense sector is really a state monopoly and should be treated as such. There are approaches to improving performance and reducing costs such as performance-based contracts. But to pretend that this sector can be a mirror of the commercial marketplace is wrong and ultimately counterproductive to the goals of reducing costs for defense goods.

There is a natural place for competition in the defense marketplace. In the early phases of a major program – concept definition, technology development and risk reduction – there is value in competition. DoD has experimented with continuing a second contractor through later program stages, including into full-rate production, with mixed results. Also, there are a range of goods and services that are commoditized and can be treated the same in the defense market as they are in the commercial world. Hence, the defense customer can use competition to achieve reduced price for a specified level of performance. This kind of competition is inherent in the products themselves and in their use. It is natural.

But for platforms, major weapons systems and networks, products that are likely to be in the force for decades and undergo repeated upgrades, certainty, reliability, quality and effectiveness must be the considered. Beyond a rather obvious point, competition for this set of goods and services is not natural but forced.